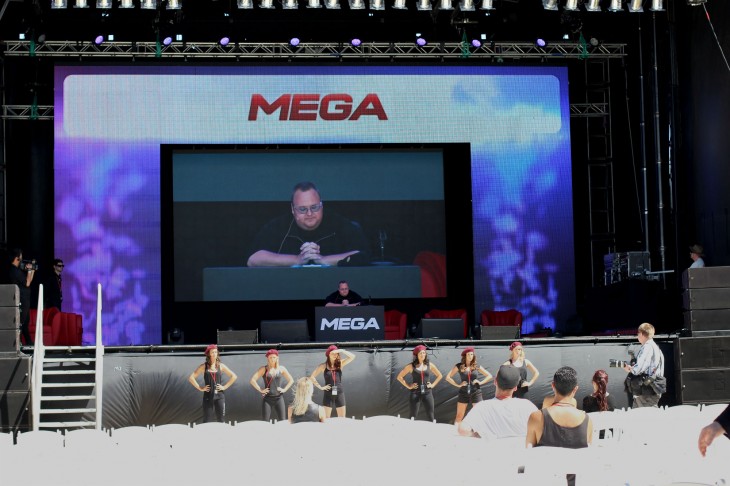 Mega, the new file sharing service from Kim Dotcom, has passed 1 million users, according to Kim Dotcom who spoke at the launch of the service at his mansion in New Zealand today.

We’re here on the ground , where the larger than life internet mogul is set to launch his latest venture officially. Mega is now open to the public, but Dotcom doesn’t do anything without some style so we’re here to see what he’s got up his sleeves.

Here are our updates from the event, including responses from the open Q&A session with Dotcom and other Mega execs.

Right now, we’re waiting to go in. The event is starting with a very interesting video. “Technology. Independence. Knowledge. Integrity. The New Zealand Maori are on stage doing a traditional welcome.

Kim Dotcom is on the stage and doing a speech. “The internet belongs to no man. These attempts to rule the internet are against innovation and must stop.” He went on to say “our copyrights and access were taken from us without a trial or notice.” He kept going, though and said that “Those who try to stifle technology and innovation will be left on the side of the road in innovation and history.”

“According to the United Nations, privacy is a basic human right. The government is spying on you and completely invading you basic human right.” Kim says, his point of view is this “if I’m not doing anything illegal, why is my data being captured?” Some of you may have nothing to hide – like John Banks for an example (this is a stab at a scandal with a New Zealand politician early last year).

He also confirmed that Mega had one million users on day one and said that “we cannot be stopped.” They’re re-enacting the arrest now – helicopters are everywhere. They just reenacted the arrest from last year. Currently a lot of dubstep, explosions and more.

“I’m sure you guys have a lot of questions.” The team have now joined him on stage.

Q: “When will Megabox launch? And the other associated websites?”

A: “It will be six months. I am a perfectionist and want to get this right.”

Q: “How will you stop Megaupload happening again?”

A: “We have scrutinized every pixel to ensure it’s built from the ground up to adhere to the law.”

“Kia Ora Kim. You are very welcome here. Q: Because our silly government was involved in the arrest, will they stand accountable for the destruction of your business?”

“A: My feeling is the government has been mislead by this case. I hope there will be some resolution. I am not a criminal. I have done nothing wrong.”

A: “Yes! It will – it’s content distribution. Down the road, it’s our goal. Watch this space.”

Q: “I’m asking where does an email go if it disappears?”

Q: “How much of the dev work of Mega was done off-shore? How much do you think you’ll utilize the NZ laborforce?”

A: “The dev work was done by Mattias and Bram. Megaupload had 220 employees worldwide when shut down. These guys lost their jobs when shut down without payment. We are going to rehire all of those who want to come back to us. We plan to make a few hundred jobs in New Zealand.”

A: “Nothing that was in Megaupload is part of this. We built it from the ground up.”

Q: “What can young people expect from Mega?”

A: “It was always my goal to provide a platform for knowledge and education. Piracy so common that all internet companies have to deal with these issues. f you go to Google, you will get the piracy results. If someone speeds with the car he just bought, you don’t shut him down.”

Well, here’s something that we didn’t already know, Kim Dotcom says that he is currently writing a book. Given his experiences over the past year, that will certainly make interesting reading.

“I want to find a diplomatic solution” to the issue of my extradition, Dotcom says, before explaining that he has evidence that this move is wrong. “The wiser thing to do is to start a dialogue to solve this problem between Hollywood and the Internet. We can solve this by sitting down together.”

Dotcom says he’s a “reasonable” man who wants to move on and help bring a dialogue rather than continue the hostilities with the US and New Zealand governments.

Megaupload would pay certain customers to upload their files but Dotcom explains that there were limitations to ensure that the rewards program was not used for piracy. He explains that users were not rewarded for files that were more than 100 MBs: “have you ever downloaded a movie larger…they don’t exist.”

In addition, only premium users were paid, but Dotcom says that authorities didn’t consider these details when prosecuting the company for copyright violations.

“They didn’t care about these little details, they just wanted to shut us down,” he says.

Dotcom is asked what he would say to Barack Obama if he was watching the live feed (that would certainly be something). The Mega founder once again stresses his keenness to engage in positive discussion: “Come to the table, let’s talk, let’s fix this.”

Q: “Your funds are frozen. How did you launch the website”

A: “We have some investors. Tony Lentino helped us – he is amazing.”

“After this today I’m going to take myself back more, it’s not healthy, I want a good relationship with New Zealanders and I don’t want to be seen as someone who is always in the media,” Dotcom says. He says that we won’t hear much from him, aside from his court appearances, since he wants to stop being a “media whore”.

And with that, it ends. “Thank you all for coming. Wish us good luck,” Dotcom says. The bar is now open…’nuff said!

Read next: Google's Eric Schmidt calls for an open Internet as he lifts the lid on his visit to North Korea