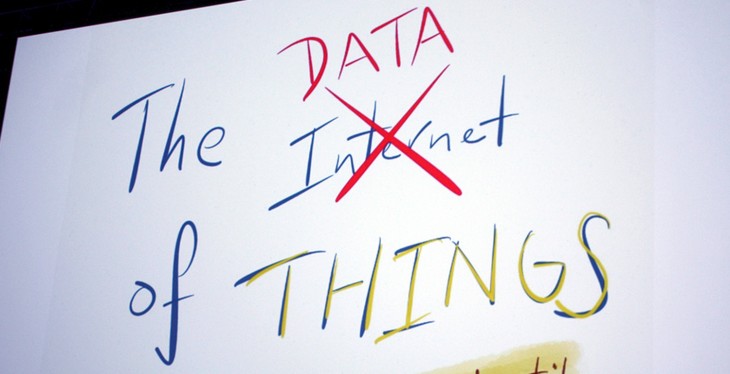 This year’s Le Web event in Paris was based around the them of the Internet of Things (IoT); the way in which objects around us will gather data and connect to controls or other machines via the Internet.

The term Internet of Things was coined by the British technologist Kevin Ashton in 1999. Today, the huge amounts of data we are producing and the advances in mobile technologies are bringing the idea into our homes and daily lives.

There are still issues that need to be bashed out of course, proprietary technologies and closed data systems don’t do much to help things along. Privacy, security and networks are also in need of further consideration.

However, products like the Fitbit or Fuelband are already becoming commonplace and makers are experimenting with remote systems like Lockitron for front doors and Growerbot for watering house plants.

It’s important to consider where data is coming from when thinking about IoT. A lot of the useful data we might use personally, naturally comes from us. So, not so much an internet of things as an internet of people – with things that gather data.

DJ Patil, a data scientist with Greylock Partners, gave a talk at Le Web about how we could be using data to improve ourselves.

“It should be the Internet of nouns,” he told The Next Web. “A noun being a person, place or thing. When we think about ourselves, we  create data – things like our temperature, perspiration, our heart rate, can all be measured. So the way we instrument ourselves can help us to understand more about ourselves.”

One of Patil’s clear examples is the data we use in medicine: “We can build jet engines that tell us when they’re sick. Why don’t we have a world where the doctor looks at your data, calls you and says ‘you’re not looking that well, maybe you should come in now’.

If your general practitioner had access to the right information about you, they could indeed predict when you might need a check-up or some tests.

But as Patil points out, the raw data is not so helpful on its own and this is why people are building products that can help to communicate that information clearly. A good example we’re covered recently is MySugr, the data collection app for diabetics.

Although it doesn’t yet take blood readings automatically, but inputting the data on mood, food and health, people with diabetes can start to work with their own data. The mobile app means they can add information anywhere and even show it to their doctor. At the moment though it’s not compatible with the blood testing kits that are given to patients.

It may take some time before all ‘things’ can talk to each other via the Internet. But work is starting to emerge that will build a foundation to make this easier.

Jeff Hagins Founder and CTO of SmartThings, described the platform he has been working on that should help expand the IoT and help product designers work out new ways of connecting machines and people.

“We see things simply,” he told the audience at Le Web. “The Internet of Things has got to be built on a platform that is easy, intelligent and open. It’s not as obvious as it seems.”

Hagins broke this down to illustrate the current issues and possible solutions for expanding the consumer use of the IoT.

By making things easy to use and providing clear solutions, more consumers are likely to pick up on the trend. Through the creation of an intelligent system, developers and product creators can share and upgrade their products rather than locking them down in ways where objects only do the one thing they were initially designed for.

Technology standards will also need to be implemented so that the ecosystem for IoT is open. Currently the SmartThings hub supports ZigBee, Zwave and WiFi with plans to also integrate Bluetooth. Hagins says this way, “we can connect any number of devices and let you automate your world.”

Hagins described the ‘physical graph’ that will bring the physical world online so that we can better control it. “We believe the digital world and the physical world are merging and that done correctly what this will do is create a virtual representation of all of our physical devices online,” he said.

All of this sounds great, but for now, a lot of useful data is input by consumers. The automation of the IoT will push it on from being interesting, to being useful and it needs to be almost invisible to guarantee uptake.

Amber Case is a cyborg anthropologist and director of the Esri R&D Centre. In her presentation at Le Web she further described how we are all becoming cyborgs through our constant use of mobile devices.

“Process occur in the background and you are the input, your location, the time of day, your current speed, all these variables combined to give you some information where context is very important,” she said. “So that’s what we set out to build when we set up Geoloqi, now Esri. The next generation platform for location.”

Case also outlined the idea of the invisible button. Using the analogy of a mobile phone which originally had push-buttons and now has a touch screen where a button could ultimately be anything from a pictogram to a photo, she extrapolated from physical buttons, through liquid digital buttons to buttons in the air – that is, things that are triggered by your location or that of your mobile device.

One of Case’s examples was location-based home automation. “Instead of having a bunch of sensors all over the place, when you got home the lights would turn on, because the device would know when it entered the gps circle around the house. When it leaves that circle, it would automatically turn off,” she said.

If you consider the fact that keys, wallet and mobile are now the things you are likely to take everywhere with you, it makes sense for devices to be aware of their location rather than having to build a network of sensors all over the place to work out where you are.

Case also highlighted the need for standardisation. “We have frictionless data gathering but we don’t have frictionless correlation,” she said. “If you have to be a data scientist to do it, then it’s totally wrong.”

“Right now we have this kind of Tower of Babel of different data types,” she continued. “All these different platforms, databases and APIs that don’t speak the same language. There’s no common protocol, there’s no way for the devices to talk to each other. What we really need is a kind of protocol for all these devices that would do what sms did for phones. Really this is what is holding back the Internet of Things.”

It seems that for years now we have been finding ways to digitize almost every aspect of our lives. From blogs and journals, social media interactions, TV shows and movies, health trackers, pet cams, CCTV and of course all the associated data that comes with these activities. Now the tide is turning again and it’s time for that information to join us back in the real world.

Munjal Shah, entrepreneur in residence at Charles River Ventures. He ran an interesting survey with one thousand randomly selected people and asked them which super powers they would want.

It sounds like a high school lunchtime discussion, but the results were intriguing and Shah has ideas on how they can be put to good use with future technologies.

Shah told The Next Web that the results were surprising. “It was one of those things that reconfirms your faith in humanity,” he laughed. “One of the options that was not chosen was the ability to be seen as attractive to anyone, or to convince anyone of anything. Those didn’t show up that high on the list.”

In fact, some very human and emotional traits turned up higher on the lists of those surveyed. “The number one ability was to be able to speak all languages,” explained Shah. “That came higher than invisibility or flying, higher than super strength.”

The number two choice was the ability to comfort anyone. “That was curious as well,” said Shah. “We had invisibility as an option and that didn’t even make the top ten. But those are some real tangible results – you could get an sms if your friend is in need or their dog dies. There are products that can be built around this.”

Shah believes that there are products already available today that mimic the effects of super powers – luckily without the need to wear lycra. “If you think about traffic on Google Maps,” he says. “In a sense that is a form of seeing the future. Lockitron, the device that allows users to open or lock doors remotely – this is a bit like teleportation. It’s a process that normally you would only be able to do by being there.”

The idea of the Internet of Things turning us into superheros is an interesting one. But it’s not as far out as it sounds. Already we can find huge amounts of data, through an extension of ourselves, so why not leverage the IoT to push things further?

Power of the mind

One of the technologies at Le Web that really seemed to be on the fringes consumer technology was the Muse headband from InteraXon. Simply put, it’s a headband that reads brain waves so that users can collect data about themselves and even work on exercises to improve focus or attention.

It’s another example of how collecting data can help us make better choices, but InteraXon co-founder Ariel Garten sees a future where our brain waves may be the trigger can change the physical world around us.

“Way, way down the road, this is a technology that is going to be used to turn on and off the lighting in your own home,” she told The Next Web. “It will be able to let your computer know when you’re frustrated so you can change the size of the monitor so you can interact more effectively. It’s something that’s going to allow technology to support you more readily and effectively.”

Garten’s sensational demonstration on stage at Le Web saw the event’s host Loic Le Meur type out an email. Doesn’t sound so shocking initially, but as he typed, his emotional state dynamically changed the font his words appeared in. It looked a lot like magic.

To paraphrase William Gibson, the Internet of Things is already here, it’s just not evenly distributed. The Muse headband will go on sale in 2013, Lockitron is also shipping next year, Fitbits are spreading and the data keeps growing.

It looks as though 2013 will be a real breakthrough year when it comes to bringing the Internet of Things to a wider market. If platforms do become more accessible and standards are set, then if you can think of a ‘thing’ and find the data to connect to, it seems as though almost anything could be possible.

With this in mind, it could mean that the lines between the meatspace and digital world are about to become even fuzzier.

Read next: Forget the Internet of Things, this is the Skateboard of Awesome [video]