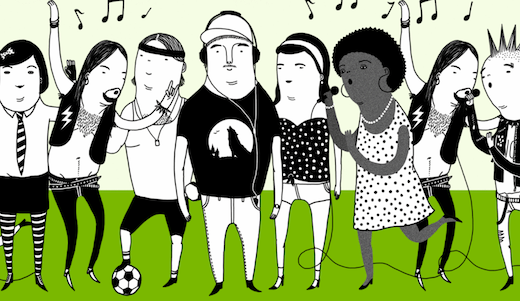 Yahoo! has just announced that it is teaming up with Spotify for a global content distribution and promotion deal that brings Spotify’s play button directly onto Yahoo!’s Media Network, which reaches “nearly 700 million unique users per month.” This move is Spotify’s largest distribution deal since the company partnered with Facebook’s Open Graph.

As you might have guessed, Spotify’s Facebook integration has proved to be quite successful, which we found out at the AdAge Digital Conference back in April. Since then, the company signed a major deal with Coca Cola and recently added a slew of new features.

Thrilled to be in business with Spotify.Just getting started !!Thanks Daniel and team !allthingsd.com/20120626/yahoo…

At Spotify we want to light up the Web with music and as Yahoo!’s global music partner we’re able to reach their massive audience. We are really excited about the new Yahoo! leadership team and thrilled to partner with them to build greatexperiences around high quality content.

Delivering compelling premium experiences across screens is core to our mission at Yahoo!. Spotify is the leader in the digital music field and together we can provide the “soundtrack” for users around the world. What Daniel and his team are doing is changing an industry, and we’re thrilled to be partnering with them.

According to the release, this partnership was designed to boost engagement for both companies. Yahoo! will get a massive catalog of songs to embed on its site and Spotify will, in turn, be shoved in front of countless new faces. Additionally, Yahoo! announced that it will “create an app for Spotify’s platform featuring Yahoo! original entertainment content, which will reach Spotify’s more than 10 million active users.”

Right now, we can’t help but feel that Spotify is getting the better deal. Reaching new users should be Spotify’s absolute top priority, and distribution deals such as these are its ticket to success. As for Yahoo!, this partnership likely wont change much for them — except perhaps, make it feel youthful by hanging with a younger and hipper crowd.

Read next: Google I/O might be for developers, but there will most certainly be something for everyone