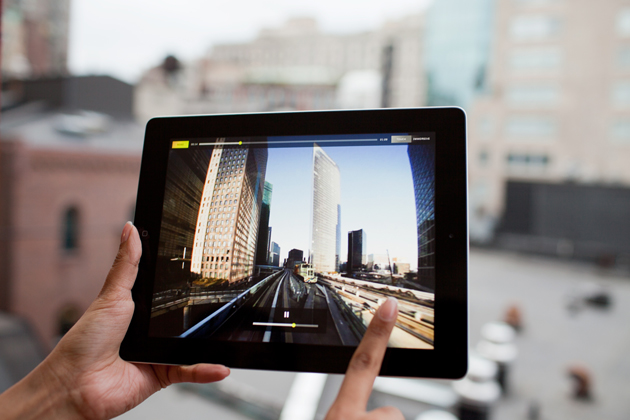 Condition One, a company that creates wild, 180 degree interactive videos for the iPad, has just announced that Mercedes, Discovery Communications, XL Recordings, The Guardian and Popular Science will be participating in its pilot launch. This news comes in addition to on-boarding Mark Cuban as an investor and hiring a CTO, Julian Gomez, formerly of NASA, Apple, Google, Macromedia and Sun Microsystems.

On to the actual product, it’s hard to truly understand how special it is until you actually use it yourself — and by that I mean holding an iPad in your hands and watching a basketball game, where you can look up and down the court like a bystander and watch penalty shots as if your head was right below the net.

iPad owners can download the Condition One Showcase App to see how the product actually works. Otherwise, check out this demo video:

Perhaps most importantly, Condition One is a member of TechStars NY’s third class, which is on quite the success streak and will be having its demo day event tomorrow. Here’s more details, in the company’s own words:

Condition One is a technology company developing next generation immersive video applications. Our flagship product is an embeddable immersive video player for the iPad / iPhone, which we license to media companies and brands. It integrates seamlessly into existing applications or can be launched as a standalone product. The beauty of our technology is that it works within existing video production workflows and does not require specialized hardware.

Condition One combines the power of the still image, the narrative of films and the engagement of tactile controls to create powerful emotional experiences of ‘being there.’

All in all, Condition One founder and CEO Danfung Dennis is simply motivated by one thing: “that the future of storytelling will be driven by technology and that visual communication can create a better understanding of one another. Condition One doesn’t just open a window into another world – it makes the viewer an active participant.”

After playing with this technology myself, I can’t help but believe that it really is the future of video journalism.

Read next: Microsoft's Windows 8 pitch for businesses: It's like Windows 7, but better