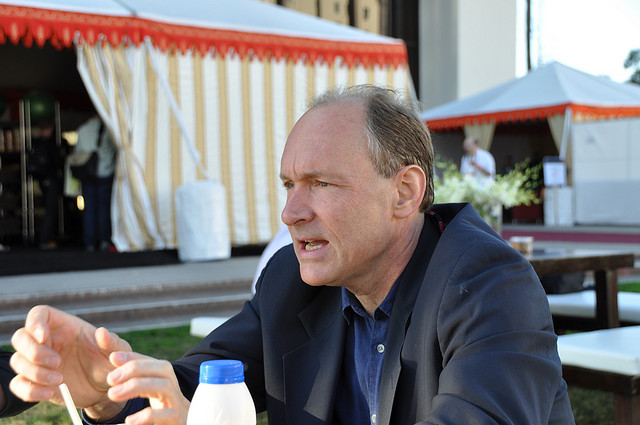 As we noted last week, the UK government is toying around with the idea of introducing laws that would open up email and social networks to more surveillance, in an effort that is claimed to be counter-terroristic. The proposed bills will be mentioned and discussed during the Queen’s speech on May 9th.

The inventor of the world wide web is having none of this, and has spoken out against the government’s proposal by calling it “destruction of human rights”.

He didn’t stop there though, raising the point to The Guardian that if the government were to get this heavily involved in our daily lives and interactions, it would have to create a strong independent third-party to monitor the goings on:

The idea that we should routinely record information about people is obviously very dangerous. It means that there will be information around which could be stolen, which can be acquired through corrupt officials or corrupt operators, and [could be] used, for example, to blackmail people in the government or people in the military. We open ourselves out, if we store this information, to it being abused.

If we thought that SOPA, PIPA, and CISPA were a big deal in the United States, this shows us that we’re only seeing the tip of the iceberg when it comes to government intervention on the Web.

Berners-Lee serves as an adviser to the government in regards to public data, so hopefully the powers-that-be value his perspective. It’s a dangerous time to start introducing legislation that leads to monitoring of the social web, since the entire industry is still in its infancy. This type of monitoring could stunt its growth entirely, scaring people away from using social apps and innovations.

As it stands, the proposed bill will allow the GCHQ to monitor all Skype, email, and social media communication, as well as log every website that Britain users visit.

Personally, this scares the crap out of me. Once something like this is done in one country, other countries will be quick to adopt. While I don’t think that this would fly in the United States, we didn’t think that SOPA would get as far as it did either. The line has to be drawn as to where and when the government can claim “viewing rights”. The unfortunate part of all of this is that these things always seem to be delivered under the guise of combatting terrorism, something that nobody wants to impede.

As Berners-Lee suggests, a third-party would have to be involved, but then again, who would monitor the monitors?

What are your thoughts about government and the Web? Tell us in the comments!

Read next: Swiss Typography, as seen on the streets of Switzerland