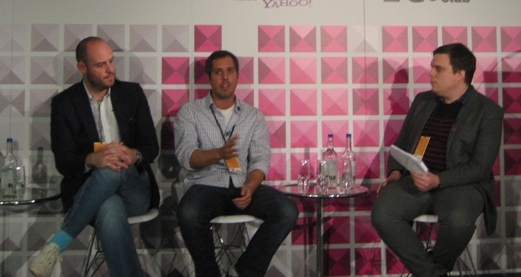 The Next Web has been out and about at Internet Week Europe (IWE) this week, checking out what big tech firms mean for the UK startup scene, and also catching up with the likes of Wikipedia founder Jimmy Wales. You can monitor all our Internet Week Europe coverage here.

There are countless digital behemoths that dominate their respective spaces. And whether it’s Amazon, Apple, Facebook or Google, it’s important to note they were once startups too. In fact, it wasn’t that long ago we argued that Facebook is still a startup, but that’s a discussion for another time and place.

One of the events that caught our attention at Internet Week Europe was Survivor Stories, which was real insights from entrepreneurs who had taken what was starting to look like a failed venture and transformed it into something highly successful. We are, of course, talking about pivots.

This session sought to answer the question of what are the challenges in going from a startup to a standout company? What are the defining moments in a budding company, and what are the most important takeaways of building a company from the bottom up?

Two of the entrepreneurs in attendance were Richard Moross, founder of online printers Moo.com, and Dror Ceder, founder of Wibiya, which provides interactive features for websites. Here’s their story…

“We actually started a company a long time ago whilst still at university”, says Wibiya co-founder Ceder. “It was called Joongel. We worked on it for two years, made all the mistakes you could possibly imagine and, the day after we launched it, we turned it into a completely different company – called Wibiya, which we’ve now been working on for 3 years.”

And it seems that Wibiya has been doing something right, given that it was acquired by Conduit back in April. “It has been a rollercoaster – it still is”, continued Ceder.

But the object of today’s session is to look at survivor stories, which will require some delving into that crucial pivot from Joongel to Wibiya back in 2008. “Joongel was a vertical search engine”, says Ceder. “For example, you could search for a flight from London to San Francisco, put in all your details and you would get a bar across the top of your screen with all the top ten flight search websites to help you find the cheapest flight. We then realized that the search market was very saturated, so we changed it to a publisher offering, where search providers put it on content providers websites instead.”

After launching at an event, Ceder said they kept on getting people coming up to them asking them for something they simply didn’t provide. “They would say ‘search is really cool and all that, but if I could have a button there for users to play games, that would be better'”, says Ceder. After multiple similar requests from users, they realized there was something there, and they decided to ditch Joongel – this was on launch day in San Francisco.

This is a really key point to note for any startup. Regardless of whatever vision you have for your product or service, there has to be some degree of flexibility there – you have to look at how people want to use it, rather than how you intended it to be used, and thus be prepared to shift focus.

When we interviewed Instagram founder Kevin Systrom back in September, this was a key point to emerge, as it too had pivoted from its previous incarnation, Burbn. We said at the time:

“If Burbn was anything, it was a testbed – it was an unintentional experiment that paved the way for what would become a very successful app. The key, it seems, was in identifying ‘unexpected behaviors’ and looking at how people were actually using the product as opposed to how they were meant to be using it. Kevin pointed to the YouTube analogy which, if you didn’t know, started off as a video website aimed at the dating market – but it soon pivoted when users started uploading videos of cats doing cute things.”

So, look at how the end-user wants to use a product rather than how it was intended – and act accordingly. And that’s why Ceder pivoted his first company into Wibiya. “Website owners needed easy ways to integrate all kinds of social tools, and all kinds of apps into their sites”, he says. “So that’s what we decided to start doing, we launched a social bar that could be embedded into publishers’ websites. That’s how it all started.”


“I graduated in 2000 in philosophy and politics”, says Richard Moross, founder of Moo.com. “It was a completely non-vocational degree, but I then went to work in the design industry for a couple of years where I got a taste for experiential marketing, experiential design, graphic design and product design.”

Moross started Moo.com in 2004, raised a little seed capital, before securing $5m in Series A funding prior to it launching in the form that we know it today in 2006. But before that, what exactly was Moo?

“The original idea for the company was ‘a business card for your social life'”, says Moross. “The amazing, physical technology of the business card was 300 years old, it didn’t require batteries or software updates…it just works. It’s the single most successful networking tool of all time – but there wasn’t anything for consumers. You were still scribbling your number down on a piece of paper which seemed ridiculous. So that where the idea came from – a business card for consumers.”

With that in mind, he needed a name that set his ‘consumer’ cards apart from business cards. “Moo is a pretty stupid name to start with”, says Moross. “But the name we had originally was even stupider. I thought, ‘what’s the opposite of business? It’s pleasure.’ So I called them pleasure cards. I ran with that name for nearly two years before changing it.”

Okay, so name changes aside how exactly did ‘Pleasure Cards’ (which now redirects to Moo.com) differ from Moo.com as a business? “Pleasure cards offered exactly the same shape and size of card, and almost exactly the same methodology in how we do the printing”, says Moross. “But it goes to show how important branding, partnerships and funding can be though. It was essentially the same product.”

So how hard was it reinventing the business after two years? “I could never have built the business that I have now if I hadn’t completely fucked it up the first time ’round”, says Moross. “Because all of the things that we became and people liked about us, were a real rejection of the early principles of the business. The way the brand was positioned, the way we did our marketing, the general tone and the approach. I was quite young – I was 26 when I did it – so I didn’t know a lot about customers and marketing. Or, I should say, I thought I knew more than I actually did.”

“The things that people like about Moo are genuine things that are me and my team doing it”, says Moross. “It’s not some agency-driven thing – we’re doing it ourselves. And it’s all based on these principles that we learned very early on. I’m glad I made those mistakes, it was a huge failure, we had completely run out of money – it was screwed. It was only on the back of a few good hires that I made, and having good investors, that managed to get us through it.”

“We were fighting about about pixels, about an extra feature that nobody would care about, and for two years we struggled through discussions…deciding for the users what they need, without us even knowing what they needed”, says Ceder. “It took us two years to launch a product that could’ve taken two months. And that’s one thing we’ve learned – if you have a Web product, you should launch it in three months tops.”

So, failure isn’t inherently bad, but dragging a failure out for longer than is necessary is suicidal for startups. Fail fast, move on and learn from your mistakes.

Whilst Moross pointed to some of the logistical difficulties in coordinating a global online printing business that today shops to 180 countries, he hit on a key point that all startups can learn from, something that has been pivotal to its success. “We found the right people from very early on”, he says. “I got very lucky hiring great people.”

On that note, Moross pulled out one of his favorite conference quotes to help highlight the importance of having the right people on board. Are you ready for this? “It’s better to have a hole in your team, than an arse-hole in your team.” Ceder agreed with the sentiments. “We had this person that didn’t fit, but we said ‘if we get rid of him, we’ll have this hole. But you’re better off getting rid of the bad people and concentrating on the good people.”

Last month, we produced a piece called How to find, hire and keep top technical talent, based on tips provided by Chris Lea, a Performance Engineer at US-based Web hosting company Media Temple. He noted that a person has to ‘fit’ in a company’s culture. “The culture is critically important”, says Chris. “Would you hang out away from the office? Ask existing employes the same question. If the answer isn’t yes, then it’s no. They will be an anchor in the long run”.

Read next: Here's how you can uncover some of Google's coolest Easter Eggs