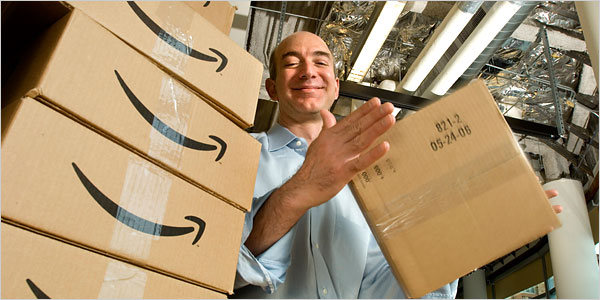 It appears that online retail giant Amazon will launch a new, vastly improved version of its massively popular shopping website in the near future, overhauling its design that not only looks great on the desktop but has been designed to appeal to tablet owners, signalling that the company could soon announce the launch of its own tablet devices.

Only a small number of users have been granted access to the new design, some of which have voiced their surprise on Twitter, which now sports big tablet-friendly buttons and a bigger, more prominent, search bar.

Gone are the blue menus and buttons, making way for a slicker white and grey interface that reduces clutter and makes navigation a lot easier. From the screenshots that were shared with us (thanks Derek), Amazon has stopped its navigation menu from loading on page load, now displaying it when the user mouses-over the “Shop By Department” button.

Amazon makes sure that in its new design, it pushes the products most important to it. With the site sure to receive a huge number of hits when it announces its new tablet device(s), the company pushes its Instant Video, MP3 Store, Cloud Player, Kindle, Cloud Drive, AppStore for Android, Game and Software Downloads and Audiobooks – all services that would be perfect for a potential tablet buyer.

The retailer is expected to launch its new device(s) in October, possibly announcing them in the coming weeks. Suppliers have indicated that the company will receive around 2 million units before launch, suggesting the company is confident it can sell its Android tablets in the face of Apple’s iPad dominance.

Amazon may reduce the price of its tablets significantly to lower the barrier to entry into the tablet market for its customers, using its value-added services to recoup the money it loses from price reductions. With Amazon testing a new tablet-friendly design, an announcement can’t be too far off, we are sure we aren’t the only ones that are excited.

Read next: What if Google was in the business of making custom boyfriends? [Video]