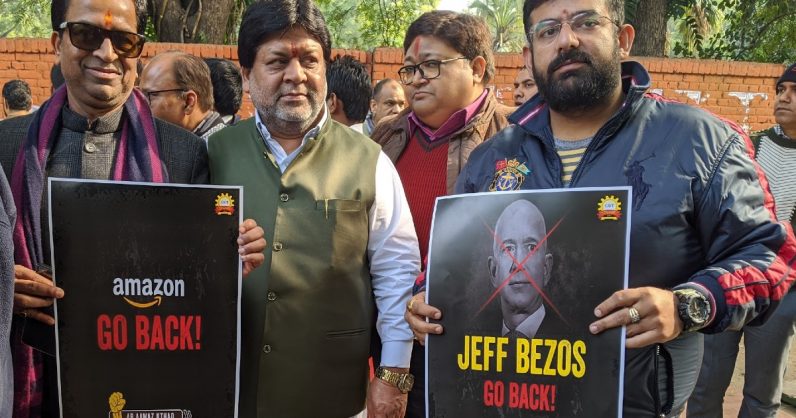 Last week, Jeff Bezos landed in India, paid tribute to Mahatma Gandhi at the Raj Ghat memorial in New Delhi, and flew kites with locals. Those were among the only uncontroversial moments of his visit to a country where he wasn’t really welcomed with open arms this time. What went wrong?

Hours before one of the world’s richest men arrived in India, the Competition Commission of India (CCI), opened an investigation into anti-competitive practices of Amazon and its Walmart-owned rival Flipkart. The New York Times summed it up quite nicely with a great headline: “Welcome to India, Mr. Bezos. Here’s an Antitrust Complaint.”

On Wednesday, after a heavily PR-regulated fireside chat with Amazon’s India head, Amit Agarwal, Bezos announced that the company would invest $1 billion in digitizing small startups. Plus, it aimed to export goods worth $10 billion under the country’s ‘Make in India‘ program.

A few kilometers away from the venue, the Confederation of All India Traders (CAIT), a union of small traders, held protests against predatory pricing and preferential treatment of certain sellers by Amazon and other ecommerce companies. Protestors shouted slogan urging Bezos to ‘go back’ and demanding that Amazon put an end to its malpractice.

Sumit Aggarwal, national secretary of CAIT, told TNW at the protests that Amazon’s business practices have affected a lot of small sellers:

The next day, Bezos also promised that Amazon will create a million jobs in India by 2025. However, Indian ministers were not impressed. First, the Union Commerce Minister, Piyush Goyal, said Bezos is not doing the country any favors:

According to a report by Economic Times, Goyal’s statement drew negative reactions from top multi-national companies with one executive saying “It will only drive foreign investments away.” Later, the minister backtracked and said his statement was taken out of context and he welcomes Amazon’s investment in India.

On the other hand, the ruling Bhartiya Janta Party’s (BJP) foreign policy in-charge, Vijay Chauthaiwale, took a swipe at Bezos-owned Washington Post, and said the publication’s coverage is highly biased:

I am not opposing Amazon as a company, in fact I am a regular customer… Jeff Bezos should go home tell Washington Post what is his impression about India.

The Washington Post has repeatedly criticized the Indian government’s recent decisions, from scrapping article 370 to strip the state of Jammu & Kashmir of its autonomy, to its controversial Citizenship Amendment Act (CAA) which discriminates against Muslims in fast-tracking citizenship for refugees of neighboring countries. WaPo’s Eli Lopez replied to Chauthaiwale saying Bezos doesn’t have editorial control over the publication.

Just to clarify: Jeff Bezos doesn't tell Washington Post journalists what to write. Independent journalism is not about charming governments. But there's no question the work of our correspondents and columnists fits within India's democratic traditions. https://t.co/TzrMZoCw69

It’s also worth noting that before Bezos arrived in India, reports suggested he would also meet Prime Minister Narendra Modi. However, during his visit, it was revealed the government had communicated to the company that Modi was not available for the meeting.

Including previously promised $5 billion investment back in 2014, Bezos has now pledged to pour $6 billion in Amazon India’s business. However, unlike his pleasant meeting with Modi in Delhi and Washington in 2014 and 2016 respectively, he might not have felt welcomed this time around.

While Bezos hasn’t expressed any disappointment with the government, some big-time investors, such as Tim Draper of Draper Fisher Jurvetson, have expressed doubt about future investments due to the Indian government’s controversial moves in recent times, which may see minorities persecuted within the country’s borders.

Reports suggest that in the last couple of years, foreign investments have dried up and investors abroad have sold Indian companies’ shares worth billions of dollars. Bezos and Amazon know the importance and opportunity of the Indian market, and might not change their strategy despite a less-than-cordial reception. However, it remains to be seen if other investors will be equally bullish about betting on the country’s economic future.