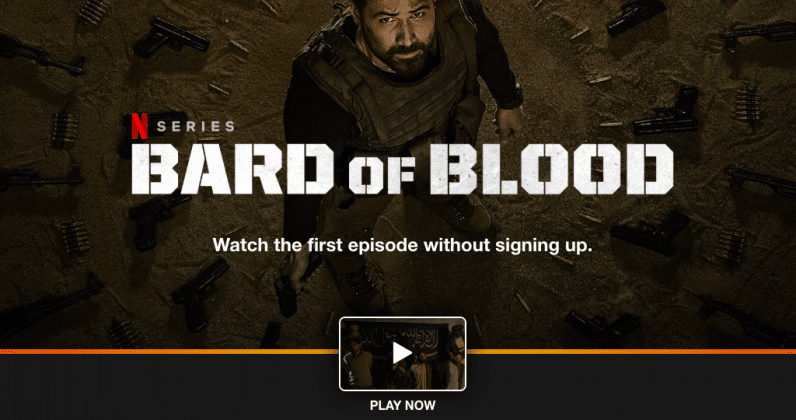 After introducing $3 per month mobile-only plan in India, Netflix is experimenting with a new strategy to lure more subscribers – free episodes for non-registered users.

The streaming company is offering to show the first episode of its new series, Bard of Blood, for free even if you’re not a Netflix subscriber.

The company said the free offering is only for a limited time:

At Netflix, we try different ways to bring people closer to great stories. We believe many people will find the thrilling story of spy Kabir Anand very appealing and are excited to make the first episode of the series available to everyone for a limited time. In the future, we will consider if we will do this for other films and series.

Emraan Hashmi, the lead actor of the series, tweeted the link of the first episode for everyone to see.

Earlier this month, Netflix aired a free episode of its series Elite in Mexico and Columbia.

This is one of the many experiments the streaming giant is indulging in to up its subscriber count. Netflix is facing a lot of competition with Apple TV+ coming into the picture and Disney launching its own streaming service soon. The company is doing everything in its power to stay on top in the streaming world.

You can access the free episode of Bard of Blood here.