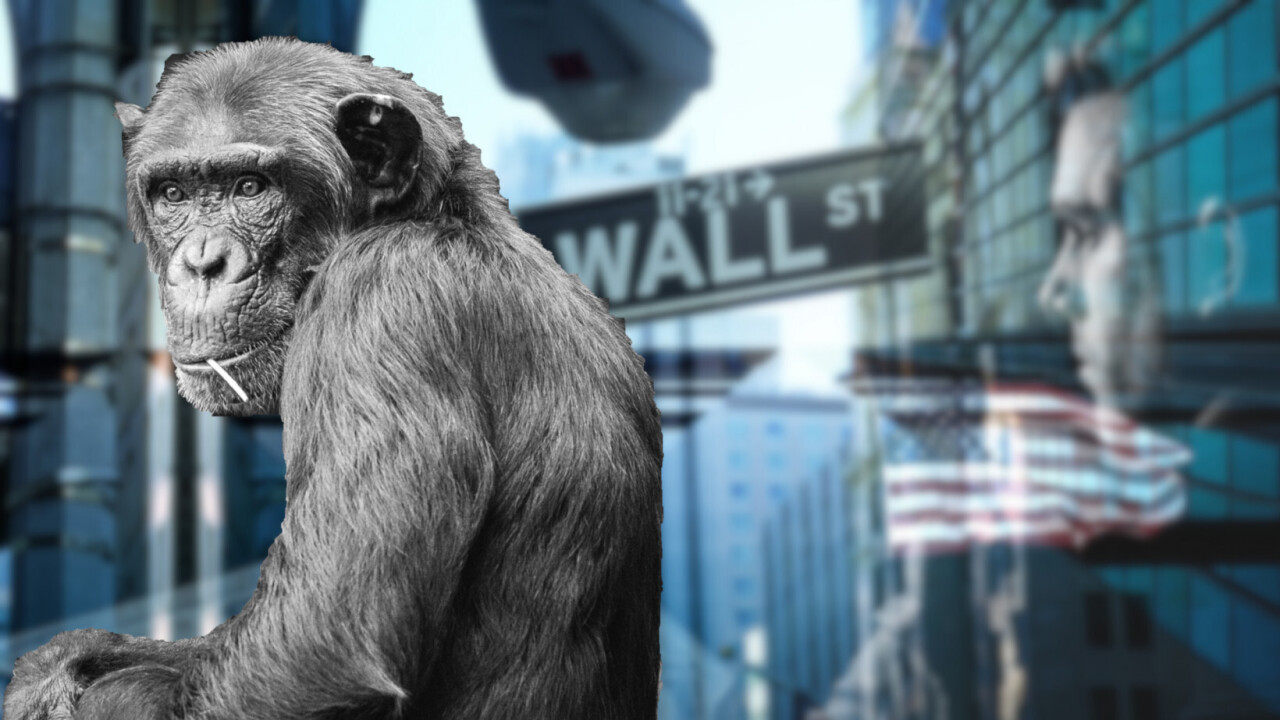 But right now, let’s pay tribute to the animals that’ve smoked some of Wall Street‘s finest.

You might already know Raven “Thorogood III,” the then five-year-old chimpanzee-slash-actor that selected a mighty fine stock portfolio in 1999 by merit of throwing darts at a dartboard.

At the time, the public celebrated Raven for his apparent aptitude for stock picks after his tech-focused portfolio returned 365.4% that year, eclipsing 10,000 US funds and earning a spot in the Guinness World Records as the Most Successful Chimp on Wall Street.

“On Thursday, January 7 [1999], Raven threw 10 darts (not including numerous misses) at a dartboard of 133 Internet related companies. Both Roland Perry, editor of the Internet Stock Review and David Allsberry, animal trainer with Boone’s Animal For Hollywood in Castaic, Calif., were on hand for the dart throwing.

“As Raven did not have prior knowledge of how any particular Internet related companies have been performing, we took his ten picks and dated the prices back to the beginning of the year to provide easier year-to-date comparisons with the more traditional market indexes such as Standard & Poor’s 500,” stated Roland Perry. “It was a pleasure working with Raven,” he added.

“He has talents far beyond what we ever dreamed possible and we feel certain that his picks will surprise many on Wall Street. We will launch a special Web site, www.monkeydex.com, in the near future to monitor the progress of his picks. Only time will tell how his picks pan out, but this much we can say — he is storming right out of the gate with picks like CMGI, which is up 95% in six trading days (… way to go, Raven).”

Unfortunately for Raven, his success and eventual bankruptcy were simply products of the time, with an investment “career” that began and ended with the dot-com boom.

In August 2000 (one year and eight months after the dartboard experiment), Raven, by proxy of Monkeydex, was down 34%, during which time the Nasdaq was reportedly up 3.37% for the year.

From there, things got worse, and not just for the chimp. Overall, the Nasdaq crashed nearly 70% between 2000 and 2002, representing trillions of dollars lost and the bursting of one history’s most spectacular stock market bubbles.

Every single stock picked by Raven is worth nothing today, each firm facing collapse in some form — be it basic bankruptcy or run-of-the-mill fraud.

Turns out tech stocks were so simply so popular back then that short-term gains were as easy as training a chimp to throw darts, but whatever success Raven found quickly evaporated alongside internet fever once the millennium turned.

Turns out a camel once beat Wall Street, too

Ultimately, Raven the stock-picking chimp serves as a fun morale booster for amateur investors: if a chimp can do it, surely anyone can.

And, if that doesn’t satisfy, the tale also illustrates the importance of active portfolio management. Better to close positions when new information comes to light, rather than stubbornly rely on immutable stock indexes or stale strategies.

For what it’s worth, Raven was definitely not the first to embarrass the money crowd.

Now, I wonder what Wall Street bets my dog has in mind…