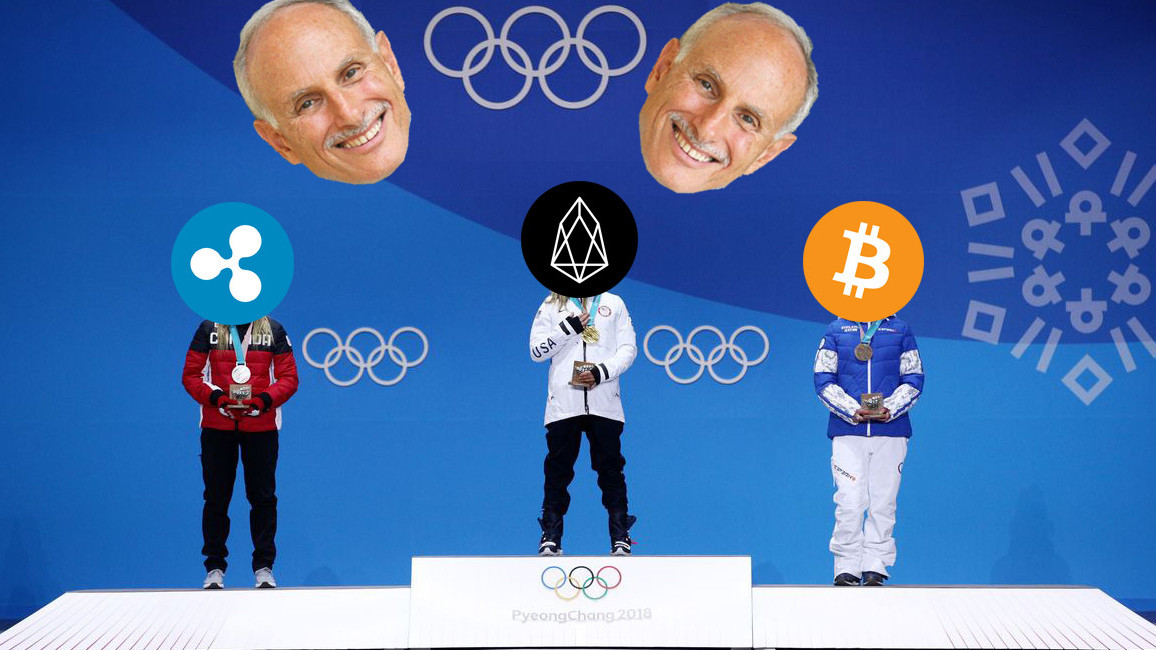 A division of finance mainstay Weiss Ratings has today put prominent altcoins EOS and Ripple (XRP) alongside Bitcoin BTC as the top three “cryptocurrencies” on the market — and it’s sure to rustle some feathers.

Digital asset ratings unit Weiss Crypto Ratings studied 122 cryptocurrencies across the market using a variety of metrics. The report seeks to dispel what it describes as a misunderstanding amongst observers who “seem to assume there’s been an industry-wide decline in usage and practical applications.”

“Nothing could be further from the truth,” declared Weiss. “Leading cryptocurrencies now enjoy three times more volume in user (on-chain) transactions than they did in early 2018. The industry’s network capacity and security have improved dramatically. And the underlying technology has evolved with new, more efficient ways to create digital assets.”

But while Weiss noted a marked improvement in the technology of many projects, the highest “Weiss Rating” assigned to any cryptocurrency was a “B-” (good). This grade was shared by EOS, XRP, Bitcoin, and Binance’s BNB; although the latter came with a disclaimer: “Binance’s ‘B-‘ is influenced by a recent price surge, which may not be sustainable.”

The rest of the rankings featured 27 cryptocurrencies with an overall rating in the C-range (fair), 75 coins in the D-range (weak), and 16 in the E-range (very weak).

Bitcoin, formerly ranked C+, was bumped up after Weiss recognized improvements to its infrastructure, such as the Lightning Network.

EOS and XRP were said to merit a B-, primarily due to high scores in Weiss’ technology and adoption metrics. Curiously, the second most popular cryptocurrency by market cap, Ethereum, didn’t even make the top five.

Hard Fork spoke with Weiss Crypto Ratings’ chief analyst Juan Villaverde to better understand how it came to these conclusions, as well as how critical factors like consensus and decentralization factor into the firm’s methods.

Weiss published two top 10 lists: one that considers possible risks and rewards associated with investing in cryptocurrency, and one not so concerned.

Disregarding the risks involved with investing in digital assets resulted in higher grades for pretty much every top cryptocurrency.

“Investors must not ignore the risk of loss, which remains far higher in crypto markets than virtually any other asset class,” reads the report. “Thus, the overall Weiss Crypto Ratings, which include risk and reward factors, are lower than the Weiss Tech/Adoption grades.”

The list on the left below includes considerations related to potential risks associated with investing in these digital assets, and the other doesn’t.

Villaverde told Hard Fork the process behind these ratings is proprietary to Weiss, but he did share some insight into its four metrics: technology, adoption, risk, and reward.

The technology model evaluates the potential of a cryptocurrency to achieve a variety of goals, like “transaction speeds and other scaling solutions, energy efficiency, sophistication of monetary policy, decision-making capabilities, flexibility to upgrade, sophistication of smart contracts.”

Okay, but where does decentralization fit in to all this?

All these factors certainly seem important – but one glaring exclusion is decentralization. Included in Weiss’ top 10 are a high number of cryptocurrency projects that operate by trusting considerably fewer network participants than Proof-of-Work (PoW) blockchains like Bitcoin and Ethereum.

Many listed projects have less than 100 validators on their networks. In EOS’ case, it’s 21, and NEO’s network is as small as seven fully validating nodes. Ethereum has almost 9,000 securing its blockchain, and Bitcoin has more than 10,000.

This makes sense, but only for those blockchains using the PoW consensus algorithm. So, how Weiss defines and weighs decentralization depends on how (and by who) transactions are confirmed on a particular network.

“In PoW ledgers, for example, it evaluates how difficult it is to acquire 51 percent of the hashrate. In Proof-of-Stake [(PoS)] coins, although there’s many variants of that consensus model, the primary issue is how easy it is to acquire a controlling stake,” he said. “Other ledgers are secured in different ways but the fundamental principal is the same: How could a malicious actor acquire the capability to double-spend on the network?”

Villaverde told Hard Fork that Weiss considers the number of network validators to be just one part of the equation, as the issue of security and how a distributed ledger reaches consensus is complex, and it varies on each network.

“Attempting to reduce these issues to just one simple number is why we find there is so much disagreement among industry leaders. And it is also why our models use a wide variety of sub-models to address these issues,” he noted. “In the case of EOS or NEO, for example, what matters most is who controls the stake to elect those validators. EOS has fewer controlling parties than 21.”

“Ethereum or Bitcoin have a large number of nodes but these do not write the ledger; they only validate what miners are doing,” Villaverde continued. “There are a small number of miners who control the overwhelming majority of hashrate, however. If these miners were to collude, they could ultimately cripple their networks, even if those ‘listening’ nodes chose to ignore them.”

It must be mentioned that while Ethereum is currently powered by PoW, its core development community has been intent on shifting the network to a PoS consensus algorithm called Casper. It’s been a very slow process.

But hang on: isn’t EOS more of a cloud computing service?

The published results were pretty damning. Not only did the researchers find EOS is more of a glorified cloud computing service than a “real” blockchain, but analysis deemed it impossible for EOS to protect itself against cartels forming in the system, which would throw the integrity of the network in disarray.

“We thoroughly review this type of research but seek to filter out commentary that is driven by ideology or an intellectual commitment to certain approaches,” Villaverde told Hard Fork. “For example, some claim that a ‘real blockchain‘ must be PoW. Bitcoin ‘maximalists’ argue every project is a scam except for Bitcoin. Others say Bitcoin and Ethereum are ‘real’ but the rest are ‘illegitimate.'”

“Overall, we have yet to see a universally accepted definition of a ‘real’ blockchain. For these reasons, we keep an open mind. We don’t claim to know what a ‘real’ blockchain is, or what ‘true decentralization‘ means,” said Villaverde. “Nor do we believe strict definitions are desirable. Rather, our model analyzes all facets from several perspectives, while removing personal opinion and bias from the ratings process.”

Weiss’ report also contained recent statistics that showed the EOS network has been processing more than 4.5 million transactions per day, just in front of WAX (another “Delegated Proof-of-Stake” blockchain).

Unfortunately, it stopped short of providing further details as to what dapps specifically could be driving the high amounts of new traffic, other than referring to these numbers as proof of increased adoption within the industry.

It’s worth pointing out that data shows a large chunk of that traffic has been coming from gambling dapps.

“We haven’t done studies on the data because like we mentioned we don’t really discriminate [between transaction ‘quality’] for the time being,” commented Villaverde. “A cursory review will reveal that most volume is going to gambling and gaming dapps… that (sadly?) seems to be the niche crypto and smart contract platforms have found so far.”

These ratings might not reflect your favorite coins, but they do provide a unique overview of the cryptocurrency market, and from the perspective of who can be suitably described as an industry-outsider in Weiss. The firm did not begin in blockchain, but it’s part of it now, and it’s weighing in.