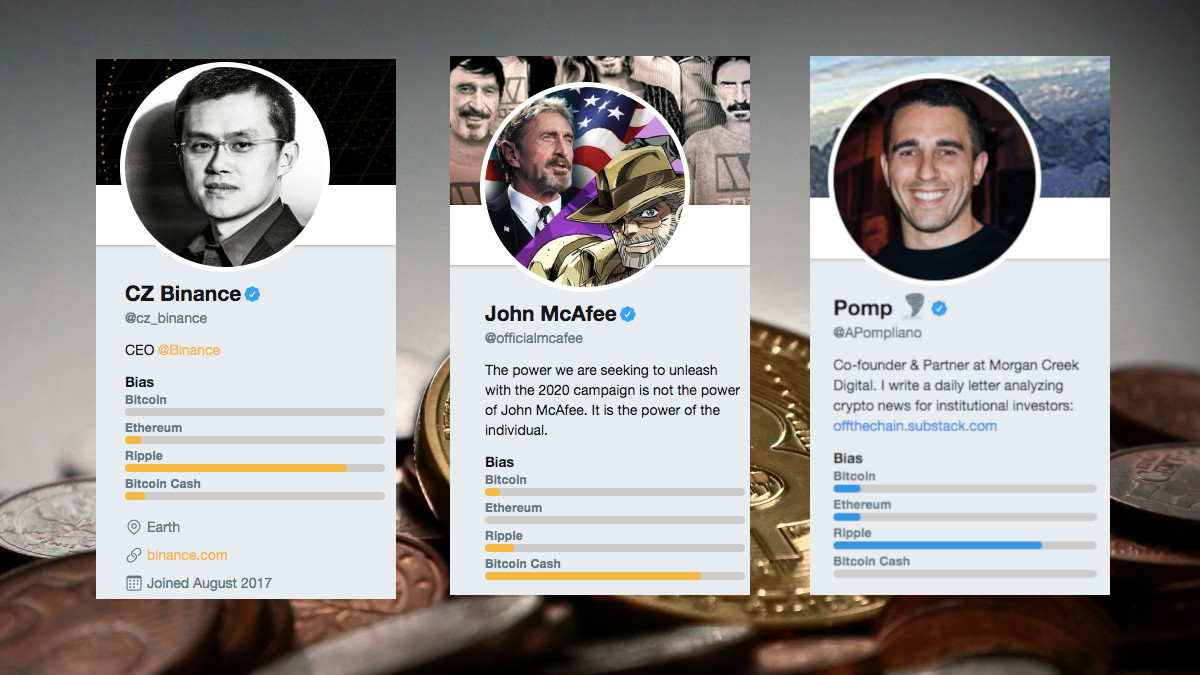 It’s a challenge to navigate the cryptocurrency space. The entire community pretty much resides within the confines of the Twitter hellscape, where differences in investment portfolios often lead to in-fighting and disinformation.

This is why one ingenious software developer created a new browser extension to help the general public figure out exactly what’s going on. It’s called ‘Coinflict of Interest.’

It’s a simple add-on that presents estimates of an author’s bias towards four cryptocurrencies: Bitcoin, Ethereum, Ripple, and Bitcoin Cash.

The idea is that the composition of someone’s Twitter following could be an indicator of their digital currency preference. If someone regularly interacts with a certain community, they could be filtering information to make it suitable for that particular audience, and thus arises the conflict of interest.

This risk is compounded within the blockchain industry, as the line between cryptocurrency pundit and venture capitalist is often blurred.

Is it always advisable to blindly trust information provided by someone who might be heavily invested in that particular technology? This is the question Coinflict of Interest is trying to help answer.

While this is totally cool (and sometimes hilarious), its usefulness boils down to how reliable these bias ratings really are.

“It’s just a proof-of-concept at this point, really,” creator Luke Childs told Hard Fork. “The results shouldn’t be taken too seriously. I think, in general, the results are accurate enough to be helpful. But there are quite a few anomalies and there’s plenty of room for improvement.”

Coinflict of Interest relies on another cryptocurrency project, hive.one, for community data. It’s a service that ranks the cryptocurrency crowd on their influence by measuring the amount of attention received by the overall community.

If a ton of Bitcoiners follow someone in particular, or regularly interact with someone’s posts, hive.one considers that person to hold influence over those users – even if they’ve never tweeted.

For example, Adam Back is the co-founder and CEO of Blockstream, a software firm focusing on Bitcoin-related projects (and he tweets a lot), so it’s not crazy to assume Bitcoin fans regularly like, retweet and write comments about the things he says.

“I’m doing some post-processing on that data, running it through a simple algorithm to try and deduce bias from influence,” explained Childs, who then confirmed there’s currently not enough context available for the ratings to be totally accurate.

“There would need to be some sort of sentiment analysis of users tweet content to work out if they are engaging in a positive or negative manner. I would expect that to drastically improve the results,” he added.

A really neat feature of the extension is the way it shows potential biases even in the little pop-ups that appear when hovering over the profile picture of a particular user. It makes figuring out the context of a certain tweet that much simpler.

Coinflict of Interest’s use of hive.one unfortunately means it can’t provide a reading on everyone. It can only give feedback on users featured in its borrowed influencer lists (but, you can actually sign yourself up, so no worries).

For those still keen to try it, Chrome users can grab the extension here. Firefoxers can download it here.

Even users too paranoid to simply install any add-on featured in an article on the internet are catered for (even though this one is open-source). They can build and load it directly into their browser by themselves, and instructions for how to do that are here.

Update 14:38 UTC, April 1: This article has been updated to correctly describe the algorithm employed by hive.one, which uses a variety of metrics to determine the influence of cryptocurrency community members, not simply Twitter interactions.