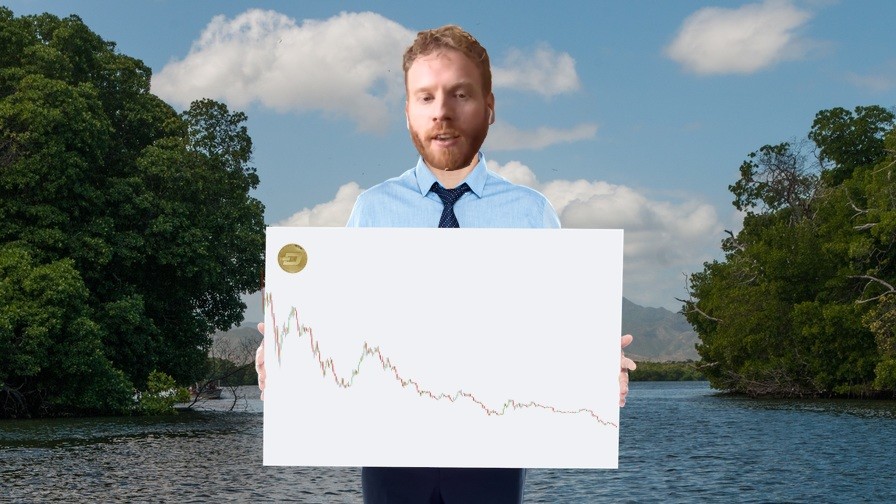 Dash DASH cryptocurrency (DASH) was created by software developer Evan Duffield in 2014 as “XCoin,” an open source fork of the Bitcoin protocol. Its vision was to facilitate fast anonymous transactions over the blockchain.

XCoin was rebranded as “DarkCoin” a few months into the launch to highlight its privacy-centric approach compared to Bitcoin.

At a time when cryptocurrencies were under scrutiny from the general population for being enablers of illegitimate transactions and funding the dark web, this didn’t prove to be good PR. The cryptocurrency was finally rebranded again as Dash a year later.

Dash was one of the earliest decentralized autonomous organizations (DAOs), one where the program ensures that stakeholders run the show, rather than a centralized authority.

The Dash ecosystem relies on ‘masternodes’ for running its operations. These nodes are essentially not very different from the standard nodes running on the blockchain, except they are required to own at least 1,000 Dash coins. Critics argue that this makes Dash not truly decentralized as it puts early adopters at a significant advantage.

A software bug caused nearly 2 million coins to be mined on the first day of Dash’s launch in 2014, and these owners are said to have an undue influence on the Dash governance. This problem was highlighted when Dash developers proposed to re-launch the cryptocurrency, but the community voted its proposal down.

In spite of the controversies, Dash remains one of the largest cryptocurrencies in terms of market capitalization at the end of 2018.

DASH reached its year-high market price of $1,362 in the second week of January, but then onwards maintained a predominantly downward trend for the rest of the year.

The cryptocurrency fell to $395 by first week of February maintaining a downward wedge, when it saw a breakout with an upward trend that lasted two weeks.

DASH saw a market upswing during April-May, but was soon corrected. The cryptocurrency rose from $306 on April 12 to $537 on April 24. It couldn’t maintain the gains, and dropped to $299 by the last week of May.

DASH fell to less than $100 in November, and as of mid-December is trading at an average of $73.5 — a massive 93 percent drop in market price since the beginning of the year.

DASH also performed poorly compared to BTC, falling in relative value throughout the year. As of mid-December, DASH has lost 74 percent of its value relative to BTC since January.

The year 2018 proved to be a difficult one for Dash in spite of gaining some distinguished endorsements in late 2017, including that from American broadcaster Max Keiser of the Keiser report fame.

The cryptocurrency suffered in some of its older markets, but also managed to gain newer ones.

Instead, the cryptocurrency found a new market in hyperinflation-struck Venezuela. In August, Ryan Taylor, the CEO of the Dash Core Group, told Business Insider that Venezuela had become their cryptocurrency‘s second largest market ahead of China and Russia.

In December, Forbes reported that KFC is in discussions with Dash team to begin accepting their cryptocurrency in multiple outlets in Venezuela.

DASH was one of the cryptocurrencies added by eToro and cryptocurrency wallet Abra on their respective platforms in 2018. Major media outlets Bloomberg and MarketWatch also began tracking the performance of DASH this year.

DASH performed poorly in 2018 in terms of market price relative to other major cryptocurrencies, and the struggle is likely to continue on in 2019 as well.

With regulatory restrictions being continuously imposed across the globe, things are becoming harder for cryptocurrencies that tout anonymity as their primary feature.

The competition for enabling faster cryptocurrency transactions has increased tremendously since Dash first launched as well. Segregated Witness and Lightning Network implementations with Bitcoin and Litecoin, and the rise of Bitcoin Cash and other fast-transaction cryptocurrencies pose a threat to Dash’s existence.

Dash’s main advantage seems to lie in its Core Group that assists the cryptocurrency‘s implementation on ground both financially and operationally. This is what put them at an advantage in Venezuela as well. It can see a relatively stable growth if it can replicate its operational success seen in Venezuela in other countries as well.

The cryptocurrency can also benefit from taking corrective measures for the mining glitch it saw in 2014 that resulted in a disproportionate distribution of wealth — and hence, power — in the Dash ecosystem. But that seems unlikely given that such a proposal has already been turned down once by its community.

Now that you have actionable information on the future of Dash, it’s time to start investing. With eToro, a leading social trading platform, you can trade manually or copy the actions taken by leading traders, taking much of the stress and work out of your investments.