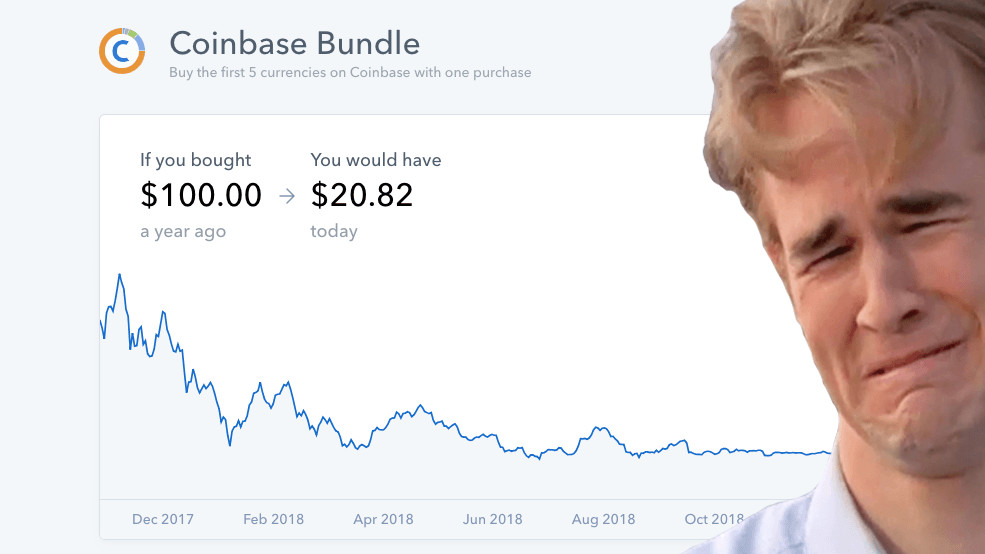 Coinbase, one of the largest places to buy cryptocurrency online, seems to want you to revel in the Bitcoin‘s failures. For unknown reasons, the company still proudly displays a chart (which we first noticed last year, during the cryptocurrency boom) that shows the dollar value of Bitcoin if you’d bought $100 worth in 2013. Sadly, it’s about as bad as you’d expect.

I love that @coinbase still have this page on their website. 😂 pic.twitter.com/yTDz3qnBvQ

That chart at this time in 2017 would have looked much different, when cryptocurrencies were all soaring to new heights. Bitcoin, for example, briefly touched $20,000 before retreating in January to around half that, and then again throughout 2018 to its current price of around $3,400.

For the optimists out there, it bears repeating that this isn’t the first prolonged slump for cryptocurrency. 2015 and 2016 saw similar crashes, though not as large in scale. Both, eventually, rallied after several months to new all-time highs.

In this case, however, Bitcoin has never seen a crash of this magnitude, that’s remained ugly for this long. If you’re the pessimistic type, it’s worth questioning Bitcoin‘s real value, and if it’ll ever recover to anywhere near the prices we saw at this time last year.

But in the mean time, let’s try to make lemonade out of lemons and just enjoy the fact that a chart that one offered an optimistic look at the future of cryptocurrencies now serves as a reminder for just how bad it’s become.

With any luck, we’ll see the moon in 2019. Or, maybe Bitcoin drops to zero. Unfortunately, I’m not much of a fortune teller.