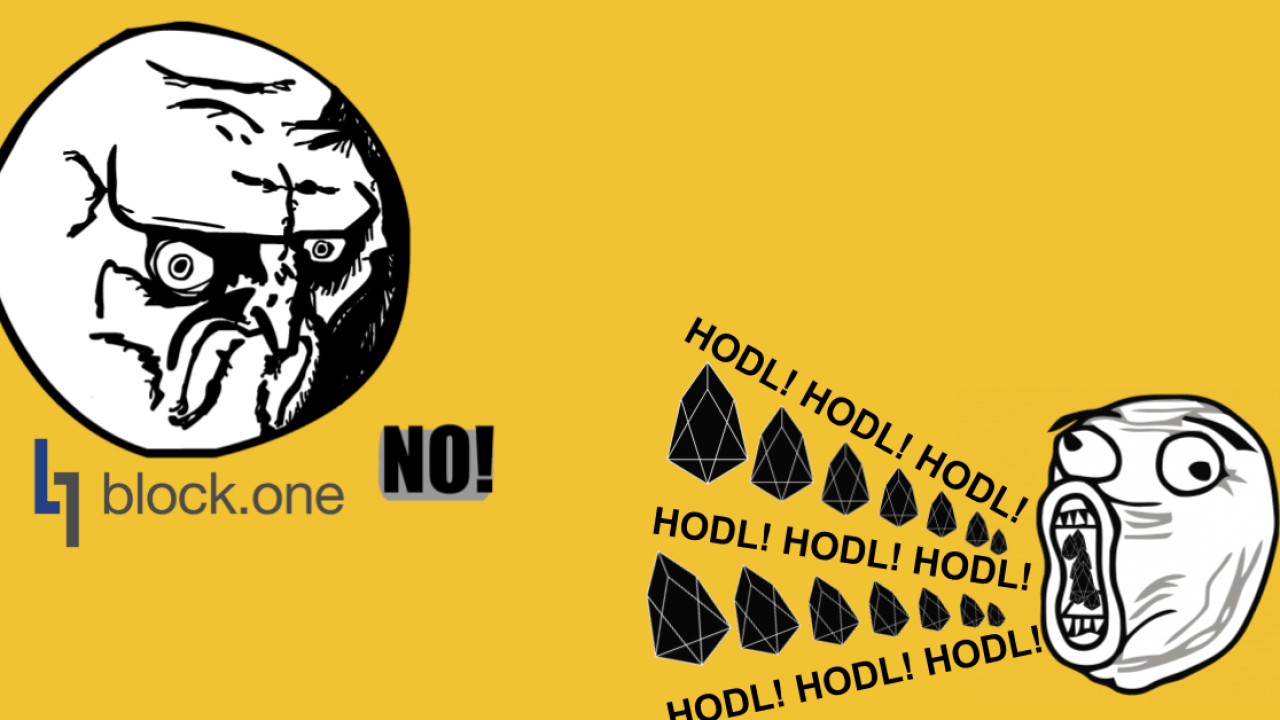 If you are one of those people who love to buy cryptocurrency and forget about it for the next several years, then EOS EOS might not be the one for you. It doesn’t want any of your HODLing.

Block.one — the company behind the EOS Network — has inscribed in the blockchain platform’s constitution that any EOS members who don’t put their tokens to use for three years could get their accounts terminated.

Such accounts will either be put up for auction or the amount held in inactive wallets will be distributed to the rest of the EOS token holders. The constitution says that redistribution will be done “according to the system contract provisions then in effect” for such event.

This is what the current draft reads about HODLing:

Article XV – Termination of Agreement: A Member is automatically released from all revocable obligations under this Constitution 3 years after the last transaction signed by that Member is incorporated into the blockchain. After 3 years of inactivity an account may be put up for auction and the proceeds distributed to all Members according to the system contract provisions then in effect for such redistribution.

So why would EOS have a problem with holding given how popular the HODL strategy is these days? We spoke to Rick Schlesinger, co-founder of EOS New York – a leading block producer candidate for the network – who offered some insight into the controversial Article XV.

According to Schlesinger, the reason is to ensure the platform does not deviate from its intended utility:

EOS is a decentralized operating system with computing resources accessible through the EOS token. EOS encourages token holders to use these tokens to build dApps and communities by staking tokens for RAM, CPU, Network, and eventually storage. These resources are scarce. If a user stakes for something like RAM, and that resource is not being used by a smart contract or other computation action then that user is in violation of Article XV. So long as a user is utilizing the resources they have, staking, and performing an action, then this Article is of no concern to them.

But here is the problem with this explanation: Block.one ran a year-long initial coin offering (ICO) for EOS and distributed tokens to practically anyone interested in buying them. Indeed, many of the people who invested in EOS cryptocurrency are enthusiasts looking to score a profit – and not developers seeking to build on top of EOS.

Schlesinger says that, while he can’t answer for Block.one, actively participating in the EOS ecosystem will be crucial to the success of the platform and this is precisely why the current version of the constitution is discouraging users from idly holding on to their investments.

“Regardless of the outcome of Article XV, we will be encouraging active participation in the EOS community regardless of whether or not someone is a software developer,” Schlesinger told Hard Fork. “Even if someone can just re-vote for a BPC or on a Worker Proposal once every three years that would completely negate any worry about Article XV.”

As Schlesinger also notes, the article does permit holding the coins long term as long as the wallets are performing some actions. So technically, you can HODL your EOS as long as you make at least one transaction (no matter how small) once in every three years.

In any case, Schlesinger points out that the constitution is not yet final and the clause in question might be subject to change. This is just a draft by the Block.one team, and the constitution could be amended by the community in the future.

It’s also important to remember that this is a proposed constitution as noted in Article XX. Also, in Article XI we have the ability to amend the constitution according to the community’s will. I would think that the community will rationally understand the nature of scarce computing resources and develop an alternative solution to the current Article XV, but we’ll have to wait and see once the chain is live and is able to be amended.

Schlesinger told Hard Fork that anyone who holds an EOS account with tokens is a part of this community and can call for a referendum. But, he further suggests that the opinions of influencers like Block.one CTO Daniel Lanimer could have significant impact on the way stakeholders vote.

Influencer impact aside, Schlesinger explains that the voting influence will ultimately depend on the amount of EOS voters hold – the fatter your wallet is, the bigger impact you have on voting.

He further argued that the EOS token is widely distributed, but a recent report by Trustnodes suggested almost 50 percent of all tokens are held by a total of 10 wallets. This clearly raises some doubts over how fair or democratic the voting procedures with EOS will be.

For the record, the largest holder is Block.one with 100 million EOS tokens – a staggering 10 percent of the total supply.

Over the past days, EOS has received criticism for the delay in the launch of its mainnet, its poorly drafted constitution, and the string of vulnerabilities in its blockchain.

Indeed, even though the blockchain finally launched on Sunday, it is not yet live — pending the election of block producers.

Update 19:00 UTC, June 12: Schlesinger has since clarified that his sentiment is that the EOS community should actively challenge the constitution and any controversial stipulations it includes.

“I do think the community is going to scrutinize [Article XV] closely (as they should),” said in an email to Hard Fork. “This is why we’re here – to experiment with this nascent technology and learn about how a governed blockchain can respond to the community’s will.”

He has further downplayed the accuracy of Trustnodes’ token distribution report, arguing the publication failed to factor out the wallets of exchange desks from the calculations.

“The key misstep Trustnodes and others have done is that they’re aggregating the exchange wallets which account for many thousands of individual accounts,” Schlesinger told Hard Fork. “If you do not extract these accounts the analysis will be incomplete: garbage in, garbage out.”