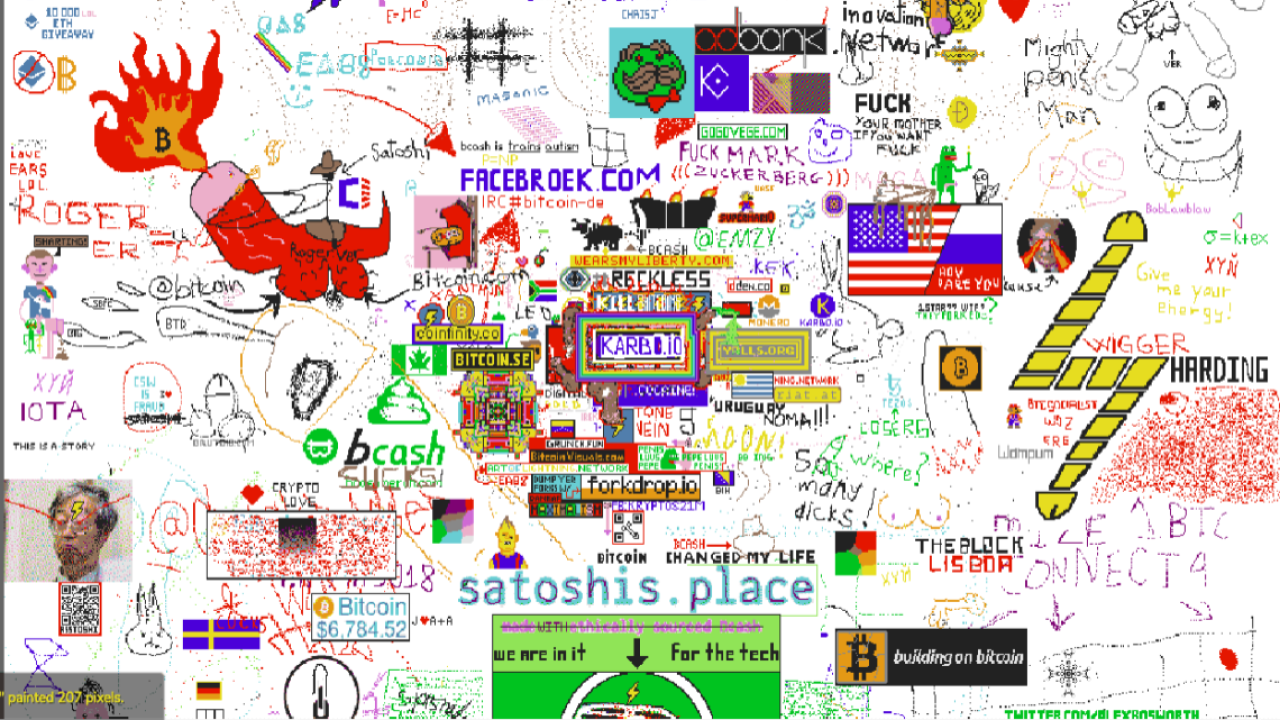 If you think blockchain technology is boring, this Twitter user is out there to prove you wrong.

Lightning K0ala has created an online graffiti board, called satoshis.place, to show the power of Lightning Network (LN) in processing micro-transactions.

For those who do not know, Lightning Network is a layer that sits on top of Bitcoin’s blockchain to make the transactions cheaper and faster.

While the technology is still in its nascent stage, it is often touted as a solution to Bitcoin’s scalability problems. Its total network capacity crossed $150,000 in April. In fact, at one point in March, it had more active nodes running than Bitcoin Cash (BCH), a Bitcoin hard fork that also claims to solve Bitcoin’s scalability worries.

But naturally, users were more interested in doodling penises on the board. In fact, the website keeps track of dicks drawn — 106 at the time of this writing.

There are one million pixels on the canvas, and each pixel costs one satoshi to paint. You can choose to draw whatever you want and wherever you want. Based on how large your painting is, you pay the equivalent amount in Satoshi (1 BTC = 100 million Satoshi). If you want to paint the entire canvas red, it will cost you $67.39 as per the current BTC price (My piece of art cost me $0.04).

We reached out to the founder of satoshis.place to understand his vision for the app.

“I created satoshis.place to explore the application of micro-transactions in the context of multiplayer games. I also just wanted to mess around with running a Lightning node figuring out how this stuff works,” Lightning K0ala told Hard Fork. “Things have been amazing so far, it’s been a laugh trip for the last three days watching people draw on the board and comment on social media. We’ve got a nice little group on Telegram forming where people post suggestions and I can gauge what stuff should be fixed or improved.”

Did he anticipate that so many people would be using the board to draw penises? “No,” he answers. “I did not anticipate how creative people would get with penises. It’s… majestic.”

He clearly underestimated the power of penises over blockchain.

Even Bitcoin developer, Jameson Lopp, took to Twitter to share his favorite penis doodle from the board. It is this one:

By my count there are no fewer than 13 dicks drawn on the Lightning-powered graffiti app https://t.co/uayIGVqafa but this one takes the cake. pic.twitter.com/Oi2MSqWLQl

If you want to draw your own doodle with Lightning Network, you can do so here.