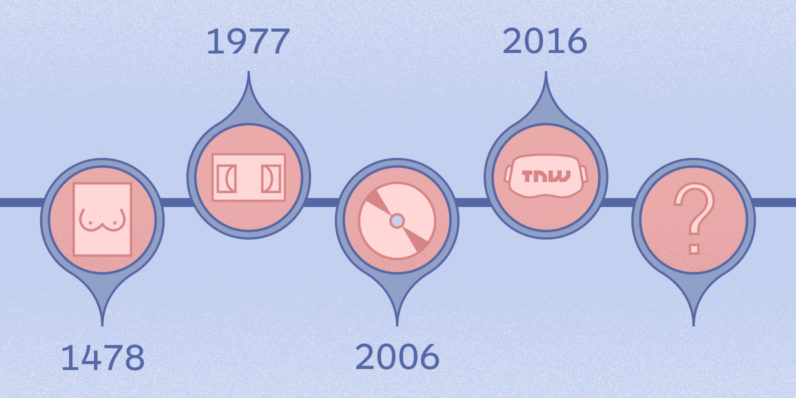 We’ve come a long ways from the writings of Pietro Arentino.

Johannes Gutenberg’s little machine both helped and hindered the growth and acceptance of pornography. With the increasing literacy and decreasing cost of printing, a completely new genre of human experience was created. But did you know one of the most well-respected literary works is also erotica? Chaucer’s Canterbury Tales. Though not written for the larger reading audience, this work was no less scandalous.

In the late 1970s, Betamax and VHS battled over which home viewing technology would reign supreme. Thanks to pornographers who settled the format war, selling adult content solely on VHS tapes and accounting for 50 percent of videotape sales in the US.

Jump ahead to the early 2000s, erotica once again changed the media format landscape welcoming DVDs with open arms… among other body parts.

Battle of the bulge

Like the format wars of the 70s and 90s, home viewing battled again with the advent of Blue-Ray discs. Though a technically lower picture quality, Blue-Ray discs offer up to nine hours of high-definition content… meaning more hours of hardcore hookups.

While it’s not the most glamorous story in the history books, it thanks a would-be ‘Girls Gone Wild’ that we have cable television. Before the Playboy Channel existed, there was the Manhattan Public Access Cable and it’s 80,000 subscribers.

Then George Urban launched “The Ugly George Hour of Truth, Sex and Violence,” where he convinced women on the streets of Manhattan to flash the camera. Thirteen episodes later, subscriptions were over 100,000. By the end of his second season, they were up to 300,000.

Looking for a friend

Ever watched a flesh film on a dial-up connection? Not fun. While discussing dialup isn’t sexy, the demand for sexy content drove the market for improved internet infrastructure.

The Netherlands is known for two things: Weed and red lights. But there should be a third – streaming.

Web-cameras and online streaming capacities made another revolutionary turn in terms of production and consumption of pornography.

Long before digital nomads depended webcams and video chat, adult sites were the only places you could engage in any form of real-time interaction. X-rated domains allowed users to view a live feed of a person and engage in communication through a webcam.

While most people associate piracy with the latest Yeezy battle, the adult entertainment industry actually leads the charge against copyright infringement.

While your salesman won’t tell you, but privacy concerns surrounding pornography drove photogs to become early adopters of digital photography.

Did you know that Snapchat was originally used as a semi-porn/semi-sexting app? Thanks to automatic deletion of naughty messages, it became a huge hit.

And while the social platform has banned pornography, plenty of adult apps have been popping up in both the Apple store and Google Play.

Google Glass really could be considered the Holy Grail device for pornography offering the ultimate in vicarious point-of-view experience.

With the consumer launch of the Oculus Rift – followed by more affordable headsets like the Samsung Gear VR, Google Cardboard – VR is readily available for the masses.

According to research, wearable VR head mounted shipments will hit three million this year, increasing to ten times that amount by 2020.

And as VR glasses become synchronized with sex toys and stimulators and smartphones, these advances and uses of virtual reality in erotica are just the beginning.

Beyond your basic blowup

While some people fear a future of killer robots, sex robots are on the horizon.

Doing it with a robot may be just a weird sexual fantasy, but with the fast-paced development of science and technology, sex with a robot might very well become a reality in the not too distant future.

According to sex psychologist Helen Driscoll, “robotic, interactive, motion-sensing technology is likely to become more and more central to the sex industry in the next few years.”