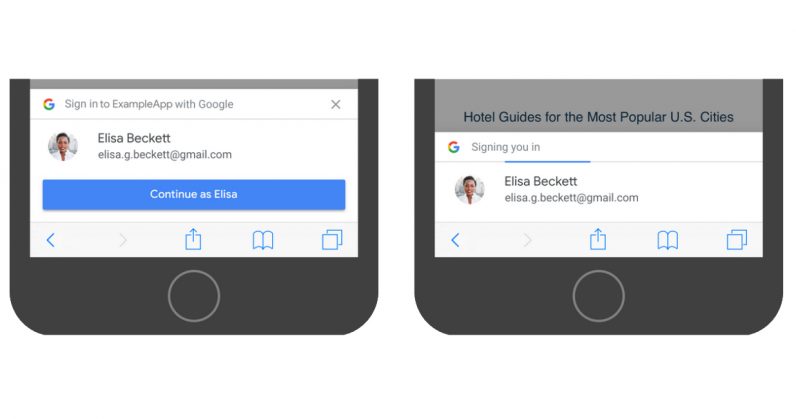 For the past couple of years, I’ve felt like the notion of registering for a service by filling in a form seems like an aging ritual. A lot of that hassle has been sorted by autofill systems, but you still have issues like remembering whether you signed up with your Google or Facebook account, or if you used a password, or if you even registered in the first place.

Google might have a way out, for those who are happy to use its solutions. The company has developed One Tap, a new system that lets you sign up on sites and in apps with a single touch on devices you’re logged into with a Google account. Developers will need to integrate this into their products so you can use it.

The idea is that not only will you be able to sign up quicker without having to fill out a form on Android, but you’ll also be prompted to sign back in with just a tap via the account you registered with. This way, you don’t need to remember passwords or even which alias you created your account with. It’ll all be presented in a uniform interface that you’ll recognize easily — across several third-party apps and services.

Of course, you can already sign up for apps using your Google account and avoid filling a form, but this is designed to be even more streamlined. Since you’re already logged in on your Android device, Google will just run with that instead of asking you to provide your Google account password a second time within the third-party app.

[Read more: Windows is coming to Chromebooks as Google partners with Parallels]

To ensure your information is secure, Google has developed a backend system called Block Store, which essentially allows said third-party services to generate a security token that’s tied to your account and use that for sign-ins instead of relying on credentials — negating worries about your password being stored in plain text someplace.

That should certainly make life a little easier for people who use a ton of apps (read: most of us), but it’s up to developers to implement these systems in their products. Lifehacker’s Brendan Hesse voiced a concern about the danger of tying several apps to your Google account, because an intruder who gains access to it could then log into said apps as well. But that’s not really very different from the current state of affairs for people who sign up via Google.

Ultimately, if there’s a more secure way to log into services and not have to remember passwords, I’m into it — even at the cost of tying myself more deeply into Google’s ecosystem, because I don’t see a realistic way around it just now.

Read next: These 3 tried and tested hacks will land you a corporate client