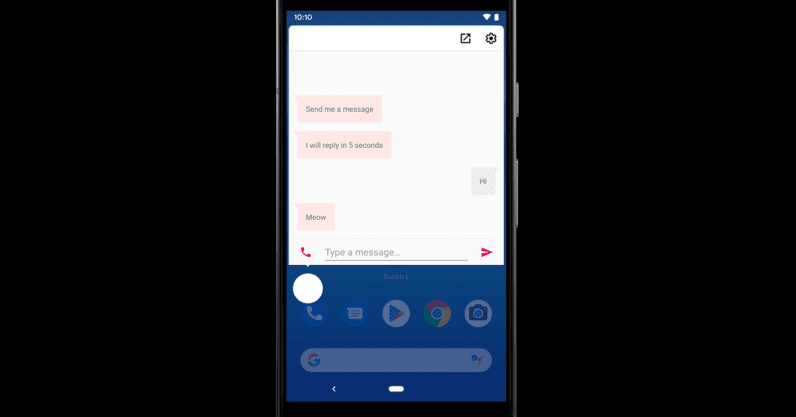 When Google first began teasing Android 10 last year – then still known as Android Q – it led us to believe the company would begin to use floating bubbles as an alternative or supplement to the standard notification shade. These bubbles allow you to interact with notifications or continue conversations easily while within other apps, and can be moved around the screen for convenient access. Unfortunately, it seems the feature was not ready for prime time and it was ultimately hidden away in the final release of Android 10.

Now the feature is making a comeback in the first Android 11 Developer Preview. Per Google’s own description of the feature:

Bubbles are built into the Notification system. They float on top of other app content and follow the user wherever they go. Bubbles can be expanded to reveal app functionality and information, and can be collapsed when not being used.

When the device is locked or the always-on-display is active, bubbles appear just as a notification normally would.

The first time a bubble shows up, you will be given the option to opt-out. This introduces the feature to users while giving them control over when they want to use them.

As Android has increasingly mirrored iOS in the past few years – gesture, anyone? – bubbles could be a way for Google to differentiate itself from Apple. While Apple has made major strides in the iPad’s multitasking abilities recently, iPhones are still largely focused on one task at time. Bubbles give you some of the flexibility of a windowed desktop system with less of the clutter.

It also remains to be seen how the feature will interact with apps that has already built in their own bubble functionality, such as Facebook Messenger and Google’s phone app. Last time I gave bubbles a try, the duplicate notifications quickly became annoying. Hopefully, the implementation is far less buggy than it was in the Android Q days.

In a similar attempt to help you have more fluid chats, Android 11 also now includes a dedicated conversations section in the notification shade, and you can even insert images into notification replies. For more on the Android 11 Developer Preview, check out Google’s announcement at the source link below.

Read next: Larry Tesler, the father of cut-copy-paste, has died at 74