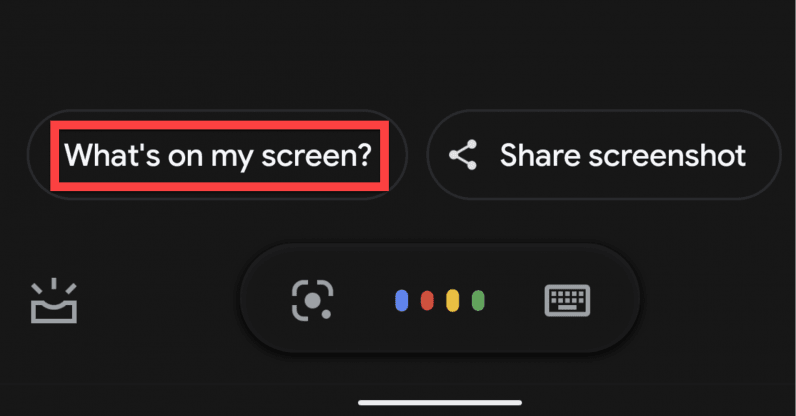 One of the most useful features Google has introduced for the Assistant is “What’s on my screen?” Tapping this function lets you quickly do things like look up things like tracking numbers or dial a phone number without having to copy and paste anything.

And then Google took the feature away sometime around May last year.

Now it appears to be back, as first reported by Android Police. Redditor u/Meningna noticed its return yesterday. While it doesn’t appear to be back for everyone just yet, a few other redditors have seen it too, including Android Police‘s Rita El Khoury and yours truly on our Pixel 4 XLs.

The feature started out life as “Now on Tap” – back when the Google Assistant was ‘Google Now.’ While somewhat of a niche feature, it was something I used several times a week. It made it incredibly easy to look up information on anything on your screen, as well as copy things like phone numbers, addresses, and tracking numbers.

This was particularly useful because oftentimes this information is embedded in an image, meaning you can’t highlight it to copy and paste as with a typical text. Some sites also don’t allow you to copy or paste text. But the Google Assistant didn’t care; if it looked like text, it was probably actionable.

Since it’s removal, my workaround has been to take a screenshot, open up the image in Google Photos, and then use Google Lens. Lens is still more powerful than the old feature, so it can still come in handy if you need to do things like translating large amounts fo text. I wish Google would let me just use Lens on whatever is on my screen without having to take a screenshot first. Still, I’m glad to see one of my favorite features appears to be making a comeback.

To check it out, simply activate the Google Assistant on your Android device. It won’t show up on every screen – it usually doesn’t show up in the Android launcher, for instance – but it should work in most instances you’d actually like to look up something on your screen. We’ve reached out to Google to make sure the feature is here to stay and will update this post if we hear back.

Read next: Samsung's new $150 Galaxy Buds+ are ready to take on the AirPods Pro