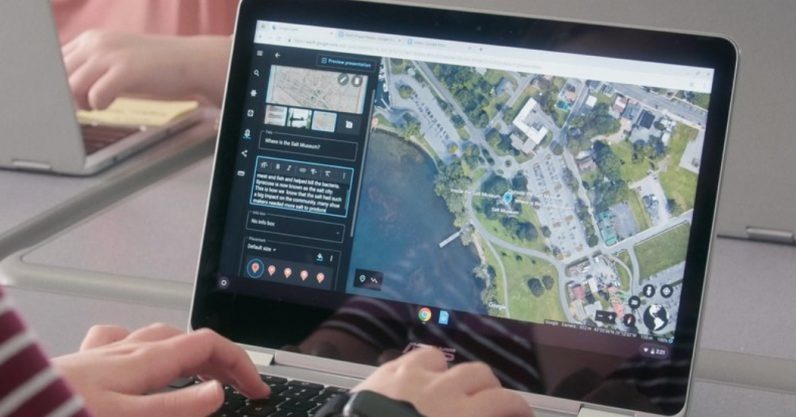 Google’s adding some new features to Earth, allowing users to create their own comprehensive stories and presentations using Google’s model of the globe.

When Google updated Earth in 2017, it added a section to the site called “Voyager,” which offered guided tours of parts of the globe. The Voyager tours were hosted by the likes of BBC Earth and Sesame Street. It was part of a general overhaul to make Earth more useful to students and explorers than it was before.

Now Google’s essentially expanding this so that anyone can do the same thing. You put together a story, presentation-style, using Street View pictures, 3D flyovers, text slides, place markers, etc. When completed, the viewer goes on a journey from place to place, following the creator’s story. It feels like there’s a graduate student out there somewhere who’s about to use this to put together a kickass reenactment of Xenophon’s March of the Ten Thousand.

It sounds like I’m making fun, but that’s actually not that far from the mark. Google showed off a little gallery of user-made creations when it revealed the new feature, and they include a tour of Renaissance architecture in Italy, an explanation of the importance of the Hudson River, and a reenactment of the novel Walk Two Moons. Say what you will about the feature, but those who’ve made the presentations did not skimp on the details.

This feels like more of Google’s effort to make its location-based services more egalitarian. Earlier this week it revealed it’s allowing users to follow Local Guides in certain cities — essentially users who write in-depth reviews and post photos, giving a more complete picture of their community to visitors. It turns Maps into more of a social network than it had been up to this point. This change to Earth doesn’t quite go that far, but it does offer users a chance to use Earth to share their own experiences with certain locations.

If you want to try making a Google Earth project yourself, select “Projects” from the drop-down menu on the left of the web version. Drafts are saved to your Google Drive.

Create your own maps and stories in Google Earth on Google