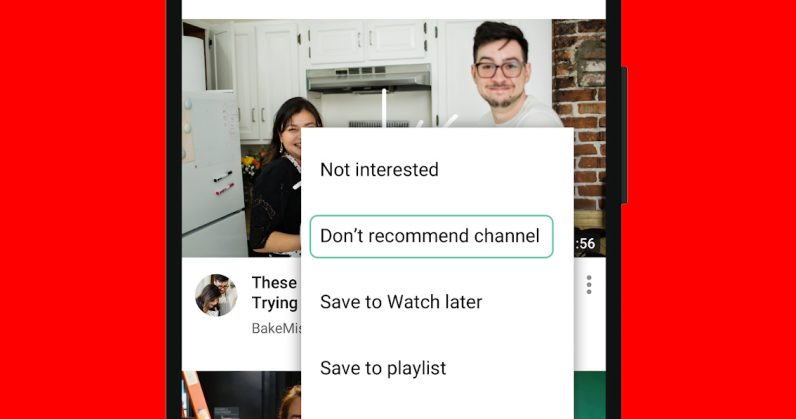 YouTube is introducing three new ways to fine-tune your browsing experience on the platform.

First, the Google-owned video service is rolling out topics and related videos on its homepage and under its “Up Next” tab. Second, it is giving users the ability to remove suggestions from channels they don’t want to watch. And thirdly, it is providing users with more information about why certain videos are being recommended to them.

With these changes, YouTube hopes to give you control over what content pops up on the site.

YouTube says the topic options are based on existing personalized suggestions, but it’s possible they are related to a video you’re currently watching, or videos published by that channel.

The option “Don’t Recommend Channel” is technically not new. According to YouTube support page, you can completely turn off recommendations from specific channels by tapping “Not interested,” then “TELL US WHY,” and then “I’m not interested in this channel.” The new change just makes the process a whole lot easier.

It also says a certain video may be recommended to you based on what other viewers with similar interests have liked and watched in the past — which is exactly how a collaborative filtering algorithm works. Spotify, Netflix, and Amazon already use this technique to suggest songs, movie titles and products you may like.

Over the last several months, the video platform has been subjected to a barrage of criticism for not doing enough to address toxic videos on the platform. Between accusations of radicalizing youths by sending them down extremist rabbit holes and ignoring harassment of LGBT content creators, YouTube has seen its algorithm recommending inappropriate videos to kids, including explicit sexual language and jokes about pedophilia.

The development also comes weeks after it began rolling out new measures to tackle hate speech on the platform. It said it will ban videos that promote the superiority of any group as a justification for discrimination against others based on their “age, gender, race, caste, religion, sexual orientation, or veteran status.”

It’s hard to evaluate whether the changes will have the desired effect. But they are long overdue, and hopefully will help clean up its toxic recommendation system.

Some features are available globally on the YouTube app for Android and iOS right away, but you can expect the others to rollout on Android, iOS, and the desktop in the coming days.

Read next: Here’s how much you would have made if you invested in Netflix stock instead of a subscription