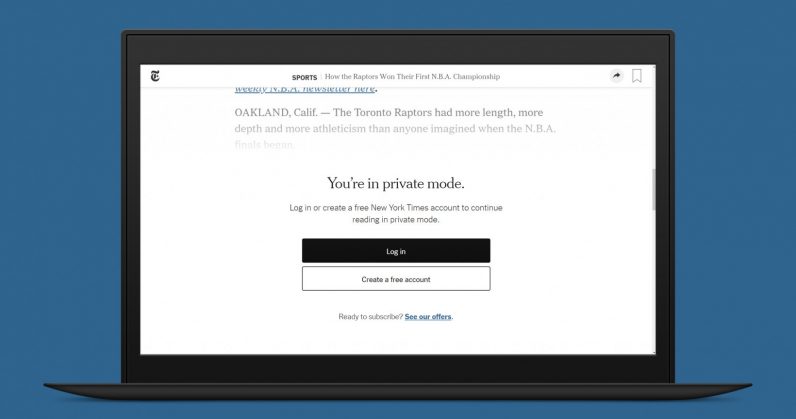 Google may have rolled out Chrome 75 just last week, but it’s already lining up a few nifty features for its upcoming release.

Most importantly, the beta version of Chrome 76, which was officially released a day ago, makes a subtle tweak that may not be welcomed by publishers like The New York Times, The Boston Globe, and others that rely on subscriptions and paywalls.

Currently, they prevent you from viewing articles in Incognito Mode (or Private Browsing in Safari and Firefox) to get around free article limits.

This is because Incognito Mode temporarily blocks a site’s ability to read or write cookies on your device, making it impossible for a publisher to know if you are a paying subscriber or if you have passed your monthly quota of free articles.

While it’s possible to read unlimited number of articles in Incognito Mode due to this limitation, The New York Times patched the loophole earlier this February by disabling the capability to read articles completely.

For developers, it’s easy to check if you are in Incognito Mode by adding a few lines of JavaScript code that checks if the FileSystem API is enabled or otherwise.

As it happens, this Chrome browser API, typically used by applications to read and write files, is entirely disabled when you are in Incognito Mode. Publishers, like The New York Times and The Boston Globe, use this trick to block detected Incognito users altogether.

With Chrome 76, websites will no longer be able to detect when your Chrome browser is in Incognito Mode due to changes in the API implementation.

Chrome Incognito mode has been detectable for years, due to the FileSystem API implementation. As of Chrome 76, this is fixed.
Apologies to the “detect private mode” scripts out there. 💐 pic.twitter.com/3LWFXQyy7w

This effectively means you don’t have to deal with the “You’re in private mode” prompt, although it remains to be seen if publishers will find a new way to get around it.

Among other features, Chrome 76 will disable Flash by default. You can, however, decide to explicitly opt-in by heading to chrome://settings/content/flash.

Google has been a big supporter of HTML5 for several years now, and has consistently urged websites to switch from Adobe’s Flash for a faster and safe browsing experience. In early 2017, Chrome (version 56) defaulted to HTML5.

Later that year, Google said it would remove Flash plug-in from its browser by late 2020, following Adobe’s decision to stop supporting Flash.

Chrome 76 will also make it easy for you to install progressive web apps on desktop by adding an install button to the omnibox. In addition, It will allow websites to automatically serve a dark version based on user preferences with a few lines of extra code.

The stable version of Chrome 76 is expected to be rolled out on July 30.