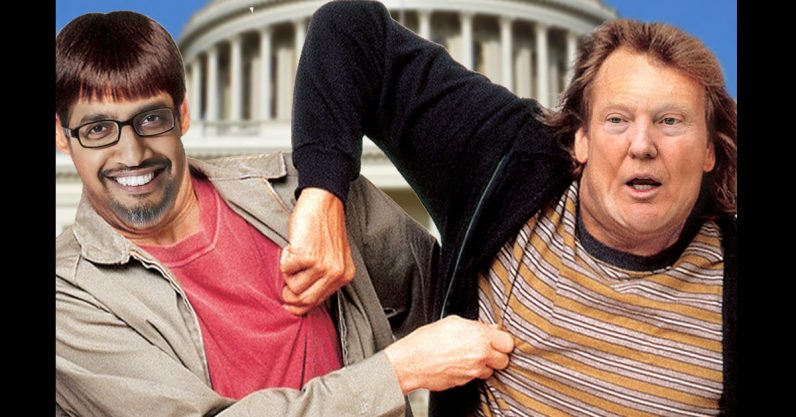 Google CEO Sundar Pichai will reportedly testify before Congress in Washington DC next week. Finally, the GOP will get to ask all the stupid questions related to President Trump’s conspiracy theory that Search is biased against conservatives.

The Washington Post broke the exciting news yesterday: at least three sources close to the matter believe Pichai will actually show up this time. And, if he does, it’ll certainly be a jolly medley of dumb, dumber, and dumber-er.

People who believe that Google secretly buries “good” news stories about Trump and other self-proclaimed “conservatives,” can rest assured GOP members of the House Judiciary committee won’t miss the opportunity to explain to Pichai how algorithms and search engines work.

Luckily, the GOP has a habit of putting technical nonsense aside and cutting straight through to the heart of the matter. We’re predicting someone in Congress will lean forward and look Pichai in his eyes — the only GOP-endorsed way to determine if someone is lying — and ask if Google has ever been biased against conservatives.

For his part, we expect Pichai to say “we don’t do that at Google.”

We’ve reached out to Google for confirmation and, in lieu of that, we hope to have reporters standing by on Capitol Hill (we won’t, but that won’t stop us from hoping) just in case Pichai breaks out into an impish grin and pulls off his mask revealing he was Hillary Clinton the entire time.

Congress is sure to ask Pichai about the 2015 Google+ glitch the company failed to mention to the half a million users whose personal data was exposed. Luckily for Pichai, who was probably just busy and forgot to bring it up, the Washington Post exposed the problem for him.

A trio of US Senators then sent a letter to Google asking it to explain why it waited to disclose the glitch, basically accusing the company of attempting to cover it up in hopes of avoiding regulation.

But, Google’s since maintained that the glitch was no big deal. Just because data was exposed doesn’t mean anything bad actually happened. Where did everyone’s optimism go?

And, even dumber (but not yet dumberer) is the huge debacle over Project Maven that played out this year. Pichai somehow okayed a contract to develop AI for the Pentagon, then started walking the company commitments back when employees, activists, and journalists began accusing the company of abandoning its founders’ principles.

Because it was among the first to bid for Project JEDI, a cloud-based computing platform for the Pentagon, but quickly withdrew its bid citing company ethics (after learning the game was rigged).

However, if there’s one thing we can be sure of: Congress isn’t going to bring up any military projects while it’s questioning Pichai. It’d be pretty awesome if Pichai did though. He won’t.

Congress will, however, certainly spend some time on Project Dragonfly.

After rumors circulated earlier this year – rumors the company, at one point, denied – that Google was working on a censored Search engine for China, Vice President Pence took a personal interest in asking the company to stop.

So, of course, Pichai did the exact opposite. He’s gone so far as to defend the project, with what appears to be an attempt to gaslight the world into thinking censoring the internet isn’t so bad, and that Google has an obligation to enter China whether through free speech or oppression.

We are compelled by our mission [to] provide information to everyone, and [China is] 20 percent of the world’s population.

Amnesty international has a different take on what Google is doing:

Sadly, the dumbest (dumberest? dumbererest?) part about all of this is that the specter of bias against conservatives is what appears to have been the catalyst for this meeting with Congress. And, putting aside any subjective views on the matter, we should all be able to agree Pichai isn’t going to claim Google has any bias, and Congress won’t understand his explanations concerning how algorithms work anyway.

Pichai also agreed to speak with President Donald Trump in a round table meeting with other officials. This was when he initially indicated he’d attend a House Judiciary hearing after the midterm elections back in September.

We haven’t been able to confirm such a meeting will take place yet. But it’s a safe bet that when Mr. Pichai goes to Washington he’ll end up accepting any invitation to sit with the President.

Judging on how Pichai’s run his company this year, it seems likely the two of them have a lot in common.

Read next: Project Fi is now Google Fi as it adds support for iPhones and more devices