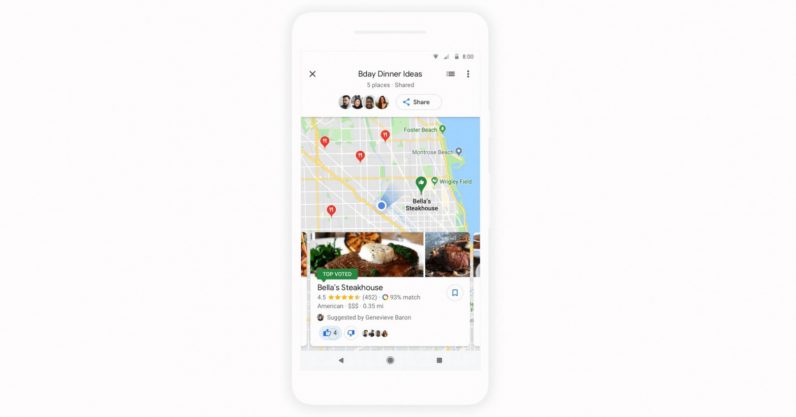 Back in May, Google announced a ton of features for Maps that have slowly been rolling out ever since. Today, the company released the one I was personally most anticipating: The ability to plan outings with friends.

For most people, planning an outing with friends involves sending a variety of links in a message thread, which quickly becomes messy and confusing, making it hard to compare and contrast choices. Google’s solution lives right within Maps: Long press on a location and it’ll be added to a shareable shortlist. The list will live as a floating bubble on your screen, making it easy to quickly use as a reference.

Once shared – through your messaging platform of choice – your friends can add locations to the list. Everyone can upvote or downvote choices; the one with the highest rating will be highlighted with a green ‘Top Voted’ bubble.

Google isn’t the first to come up with such a group planning feature, but it’s ubiquity immediately gives it a leg up over the alternatives. Pretty much everyone uses Google Maps, or at least has it installed on their phone.

Group planning is rolling out to Android and iOS this week; make sure you’re on the latest version of the app on the Play Store or App Store.