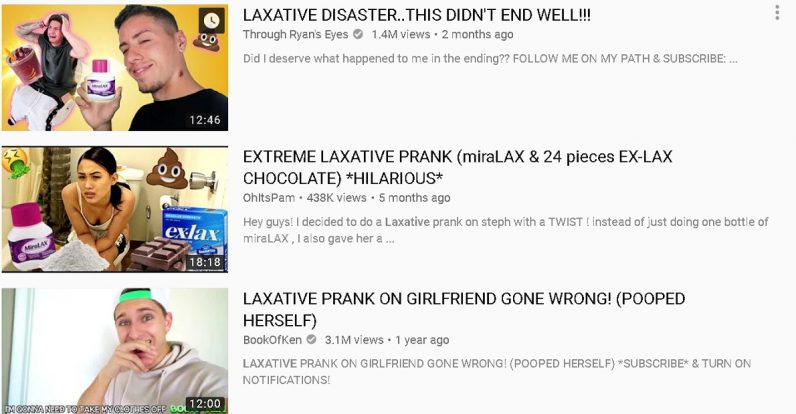 YouTube recently removed a mean-spirited video involving a YouTuber poisoning a loved one with laxatives. That’s nice, YouTube. Now get started on the thousands of other videos just like it.

Recently, the website Babe ran an expose on the channel “CJ SO COOL,” which stars a father who repeatedly “pranks” his four children and wife and laughs at the ensuing pain, suffering, and chaos his antics cause. Among his other exploits, which include recording his partner after her miscarriage, pretending to electrocute his children by throwing a speaker into the pool, and faking a home invasion that prompted his partner to pull an actual gun.

But it wasn’t this wholesome, family-friendly stuff that got him the banhammer from YouTube. It was a video in which he apparently fed his children laxatives without their consent.

The video shows  CJ So … you know what, that name leaves a bad taste in my mouth given the circumstances. The video posted by Cordero Brady showed him mixing Pedia-Lax into ice cream and feeding it to his children. When the laxative hit, they were in considerable pain and distress, which he naturally filmed despite their pleas that he stop. It could be fake, of course, though since there’s no way of knowing that, I wonder how many copycats might chase that high view count by doing it for real.

The video has since been removed from YouTube, and a spokesperson told Babe, “Content that endangers minors is unacceptable to us and we have strict policies prohibiting child endangerment and harmful and dangerous content.” But the video had remained up since 2016, with YouTube only taking action when called out. Brady’s channel has also been suspended.

I’ve said before YouTube needs to do more to protect children from greedy parents chasing views. According to the Indy Star, Brady’s channel is monetized, meaning he earned money for poisoning and torturing his children. But he’s far from the only person who’s victimized a loved one with this particular brand of “funny” content.

As Babe pointed out in a follow-up article, there’s a plethora of videos on YouTube showing people poisoning their boyfriends and girlfriends with laxatives, several of them in excess of thousands of views. I can only watch a few minutes of each before I feel the need to evacuate my stomach, so perhaps they all stuck disclaimers at the end and I just didn’t see them. But each one represents just as much of a danger to the participants (if real) and the community (if faked) that Brady’s does.

An overdose of laxatives can, according to the FDA, cause severe dehydration, kidney failure, and death. That’s a little more serious than the consequences of putting transparent film over a toilet or pretending you ate your kid’s Halloween candy.

So, best case scenario, a popular YouTuber fakes a video in which they apparently feed a loved one a laxative. Suppose an aspiring star sees that video and decides to try the same thing hoping for a similar pay-off — only they don’t know it’s fake? This kind of content is gross by itself, but the trend it represents of “harm = fame and views” is not a good look for the site.

We’ve already seen young people inadvertently kill for YouTube fame. I don’t want the next victim to be a child who thought they were getting a nice bowl of ice cream from their parent.

Read next: Alexa isn't the shopping behemoth Amazon hoped it would be