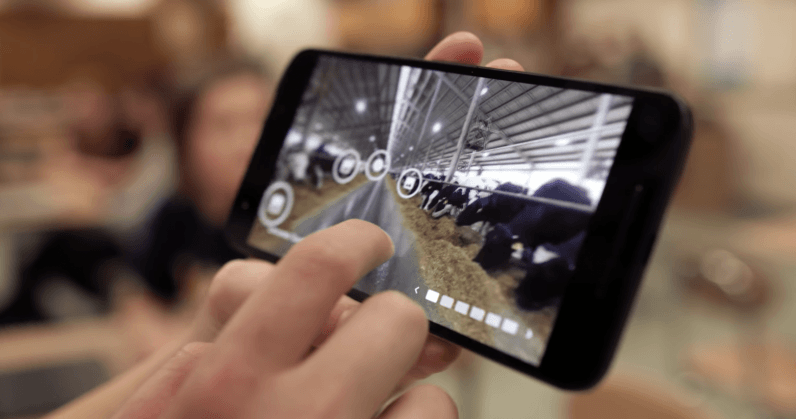 Earlier today Google announced perhaps the easiest way for “anyone with a story to tell” to do so in a rich, visual interface behind the lenses of their favorite VR viewer. Called ‘Tour Creator,’ Google’s newest virtual reality tool lets anyone produce professional-looking VR content without the associated learning curve.

“The technology gets out of the way and enables students to focus on crafting fantastic visual stories,” explains Charlie Reisinger, a Pennsylvania educator.

Creating tours is as simple as combining elements from Google Street View with your own 360 photos, or picking elements out of Google’s own 3D content library, Poly. Once done, storytellers can add their content to Poly for simple viewing in a browser or on a number of VR viewers, including Google Cardboard and Daydream. You can also embed the link into a website, allowing others to share the journey with you.

According to Jennifer Newton, a school media coordinator in Georgia:

Being able to work with Tour Creator has been an awesome experience. It has allowed our students from a small town in Georgia to tell our story to the world.

While billed at students and educators, Google says the features are available to everyone wanting to create this type of visual content. Whether that means creating tours of their school (or that of a penpal’s in China), their favorite park, or their entire neighborhood is entirely up to the creator.

Google also revealed that it would be adding options to import these tours into its Expeditions application. Expeditions, as you may remember from its 2015 debut, allows travelers from all over the globe to embark on a VR tour of iconic landmarks like the Burj Khalifa and Machu Picchu, or far-off places, like Antarctica. So far Google has served up over three million Expeditions to students all over the world.

You can give it a try here, starting today.