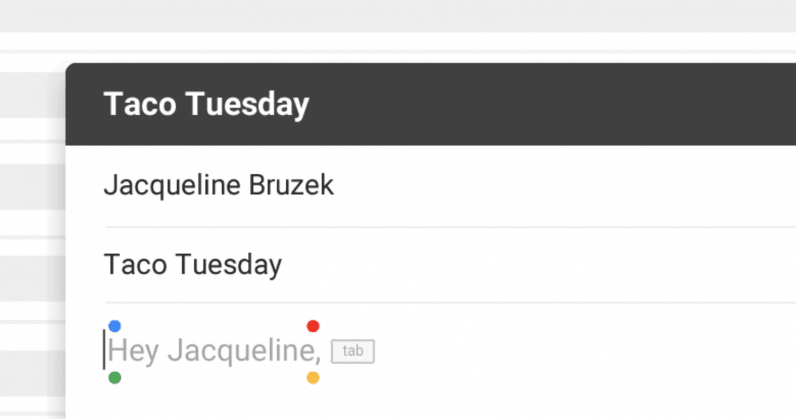 The feature, called Smart Compose, tries to understand typed text so that artificial intelligence can suggest words and phrases to finish your sentences. If you like the suggestion, just hit tab to paste it into the message.

It’s the email soul mate you never knew you wanted.

By keying in on common speech patterns, Google’s AI works a lot like predictive text in your favorite messaging application. According to Google, the Smart Compose feature saves you time by cutting back on repetitive writing and reducing the chance of spelling and grammatical errors.

Smart Compose follows another time-saving feature added last year called Smart Reply. In that one, Google quickly scanned email for context before leaving several options for a quick reply. “Do you want to get a burrito,” for example, would be met with links to send a “yes,” “no,” or “maybe” response. Users would then just click the preferred answer send a quick reply.

Both features are notable changes to the way we use email. While AI and email are still a bit of a privacy concern, the new features could ease users into some level of trust in exchange for added convenience.

Smart Compose will roll out over the next few weeks in the new Gmail.

Unfortunately, individuals using the G Suite won’t get it initially, as the feature has to be enabled in their company’s admin console. If you’re one of the unlucky saps still relying on the old-style Gmail, it may be a few months before you’ll have access to the redesign, or the Smart Compose feature, according to Google.

If you’re on a consumer Gmail account, you can access the new feature now by first enabling the new Gmail (Settings > Try the new Gmail) and then finding the general tab, and enabling “experimental access.”

You can always switch back if you hate it.

Check out our event page for more Google I/O stories this week, or follow our reporters on the ground until the event wraps on Thursday: @bryanclark and@mrgreene1977