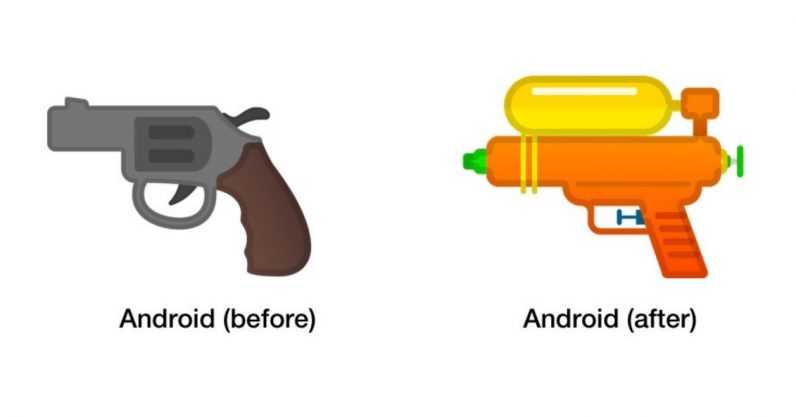 Today Google became the latest company to replace its gun emoji with a non-lethal alternative — namely, a water pistol.

I’ve been an iOS user for as long as I’ve owned a smartphone, but I admit one look at this cute squirt gun had me thinking, “You know, there are perfectly good Android phones that are much cheaper than the next iPhone will be…and I’d get to use the new water pistol.”

For context: Over the last five years, several companies have quietly switched their firearm emoji out for water pistols — except for Microsoft, which seems to have gone against the grain by switching from a ray gun to a revolver. Now Google has brought the same change to Android.

Speaking generally, I’m alright with the change — revolvers aren’t as visually interesting as neon-colored Super Soaker. But the orange Android water gun is even more fun to look at than its green Apple or Twitter counterparts. It looks like something I might actually use to win a squirt gun stand-off, and it’s something I’d be more likely to use on any given day.

The bigger picture: Emojipedia announced the change, along with a pending water pistol replacement on Facebook. Soon enough, we’ll all be using water pistols, except for the aforementioned Microsoft emoji.

In reading up on the change, I also rediscovered Android’s gold-barreled blunderbuss emoji. If we need to have an actual gun in the emoji repertoire, I’d suggest that instead of the boring revolver.

Read next: Amazon teases 'Fire TV Cube' that might double as an Echo