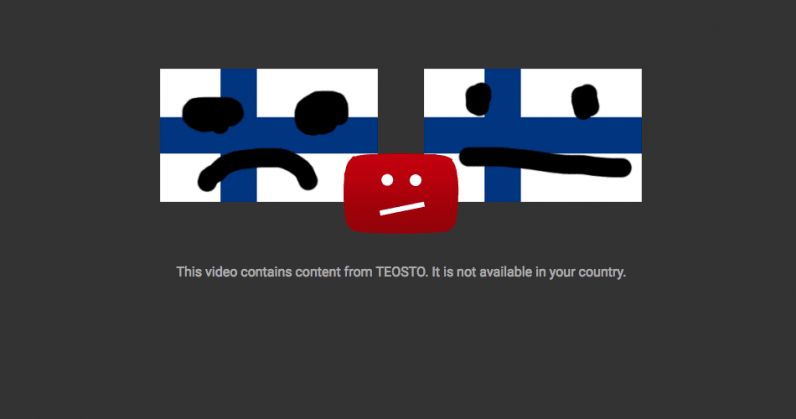 In a bizarre turn of events, today Google blocked thousands of music videos on YouTube in Finland after the company failed to immediately reach a licensing agreement with local performance copyrights agency, Teosto.

“We were unable to reach a new licensing agreement with TEOSTO. Because of this, some videos containing music will be blocked in Finland,” YouTube warned on its website.

The news comes only days before the nation will be celebrating 100 years of independence on December 6. But due to these unforeseen circumstances, thousands of Finnish netizens might be unable to stream the national anthem on this memorable day, because YouTube has blocked it off.

Despite this inconvenience, Toesto has since revealed it has signed an updated licensing deal with YouTube, Finnish new outlet YLE reports.

The bad news is it could take days before all the missing videos are back up and running.

This means that Finnish users, wishing to play YouTube videos from any of the 30,000 artists represented by Teosto, will be greeted with the annoying warning that the content “is not available in your country” for the time being.

Hi there, we were unable to reach a new licensing agreement with TEOSTO. Because of this, some videos containing music will be blocked in Finland. Here's more info: https://t.co/5kGYH19RUn

The more disturbing part, though, is that numerous Finnish Redditors are reporting that, in addition to local content, the restriction is affecting a slew of foreign videos as well.

“All of the music videos I’ve checked out this morning are blocked, including Finnish and foreign artists.” one poster remarked. “According to discussions in r/suomi this also affects tons of random videos unrelated to Teosto and public domain content.”

Everything from the national anthem to Gangnam Style is currently unavailable in Finland,” the user continued.

Meanwhile, there is a little trick Finnish netizens can resort to in order to access blocked videos while Teosto works out a new licensing agreement with YouTube in the coming days. Developer Alessandro Costa has built a handy Chrome extension that unblocks any geo-restricted video on YouTube. Check it out here.

For those using other browsers, one resourceful Redditor has pointed out that replacing ‘tube’ with ‘pak’ in YouTube URLs will similarly load a working mirror to the original clip.

Go give it a shot – it works like a charm!

Update: Director of International Music Publishing Partnerships at Google, Sami Valkonen, told TNW over email that the Big G “in active conversations to bring TEOSTO content back to YouTube in Finland.”

“Our previous licensing agreement had expired so videos containing music represented by TEOSTO are currently blocked in Finland in accordance with copyright law,” he added. “Talks are proceeding on good terms and we look forward to having great music back up on YouTube in Finland as soon as possible.”