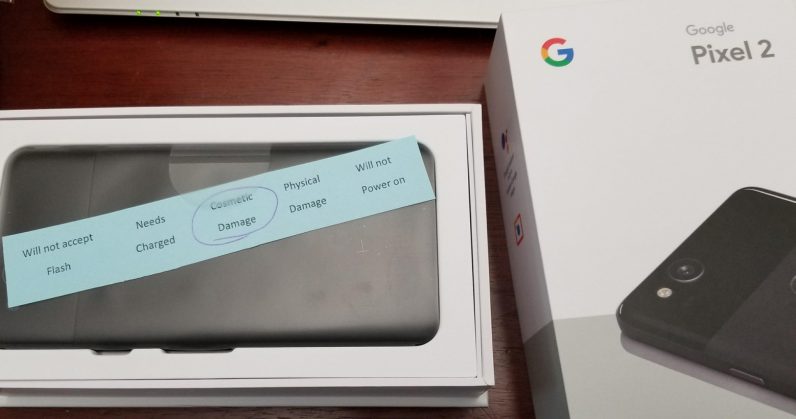 Google is not having a particularly good week. Following a litany of complaints aimed at the poor quality of its Pixel 2 (XL) display, one disappointed customer is claiming the handset the Mountain View titan shipped out to him purportedly failed quality control at the factory.

The user says he ordered the Quite Black version of the Pixel 2 with 128GB of storage. He made the purchase directly from the official Google Store. But there was a nasty surprise in store when the package finally arrived.

“I cut the tape seal, opened up the box, and was greeted with a blue slip of paper informing me the unit had ‘Cosmetic damage,'” the Redditor in question added. He has since provided an image showing the quality control failure message.

The Redditor says he tried inspecting the device in more detail, but was unable to “see the damage.” Still, he “wasn’t going to take any chances on an $800 phone” so he contacted the Google support team to work out a solution.

“It took me a little while to sort it out with Google support as this is apparently not an issue they have seen before,” the user said. “They are sending me a replacement phone that should be here early next week.”

We’ve contacted the Mountain View heavyweight for further comment on the matter and will update this piece accordingly should we hear back.

Many displeased Pixel 2 testers were already speculating the Big G could have taken a more careful approach with its manufacturing and quality control efforts, and this latest flub-up is likely to put even more doubt into consumers’ heads. For context, the company trusted HTC and LG to handle the manufacturing of the Pixel 2 and the Pixel 2 XL, respectively.

In fact, some tech aficionados have gone as far as suggesting Google ought to recall the first batch of Pixel 2 units altogether.

After a day with my Pixel 2 XL I'm firmly on the side of this screen is bad and Google should def recall this first batch of phones.

Curiously, reports from last year hinted it was precisely due to careless quality control procedures that Samsung failed to catch the manufacturing flaw that made its now-infamous Galaxy Note 7 handsets blow up in flames.

Time for Google to get a grip on the situation – unless they want to ask Samsung how much it costs to take full-page apologies in the US’ leading newspapers.

Read next: Iceland knows how to do proper political campaign videos