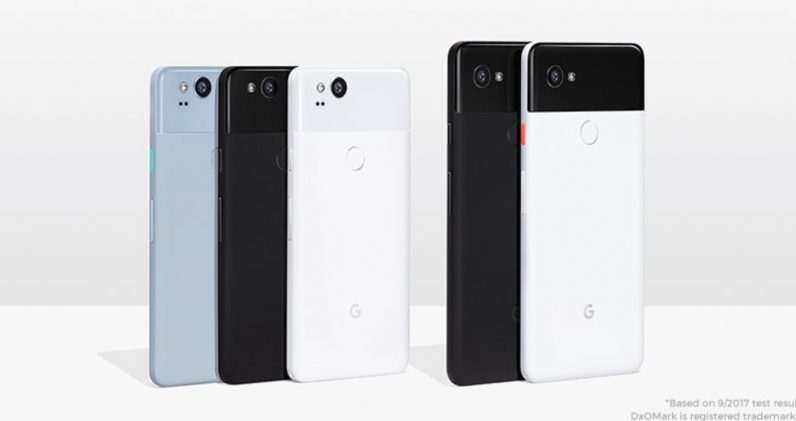 After months of rumors and speculations, Google’s answers to the iPhone 8 and iPhone X are finally here. Say hello to the Pixel 2 and Pixel 2 XL.

Rumors had given us a pretty concrete idea of what to expect, but the devices still look pretty sweet for Android purists. The smaller Pixel 2 looks very similar to its predecessor, with a 5-inch OLED display that’s now flanked by stereo speakers – a feature that also results in the removal of the headphone jack. It’s made by the newly-acquired HTC, comes in black, white, and ‘kinda blue’. And yes, it still has giant bezels – let’s accept it and move on.

The Pixel 2 XL, meanwhile, sees a more dramatic change. It’s nearly the same size as its predecessor, but packs in a 6-inch screen instead of a 5.5-inch one thanks to mercifully smaller bezels at the top and bottom, and an elongated 2:1 aspect ratio, or 18:9 if you never learned to reduce fractions. This one comes in ‘just black’ and a neat panda-like black and white, which has an orange power button because why not. Blue-lovers like me will be disappointed to hear that color is exclusive to the smaller device.

Both models feature a metal design with a small glass panel on the back, which this time holds an even smaller footprint than last years. They look pretty sleek, especially the XL 2, and the stereo speakers means that the smaller Pixel is at least doing something with its large bottom bezel instead of just being wasted space like last year’s model.

The basic specs are typical 2017 flagship fare, and are nearly identical other than their resolution and battery size:

The ‘Active Edge’ feature is a pretty unique one. It’s only been seen on the HTC U11 before and will let you squeeze the sides to launch shortcuts. Unsurprisingly, it defaults to the Google Assistant; Google showed off using it to launch the selfie camera automatically by saying ‘take a selfie.’

Of course, the Pixel is about software, so once again the Assistant shines. The company showed off its new Lens feature built into the camera, able to automatically detect objects in an image should you want to be able to find more information about them.

Speaking of the camera, Google says the Pixel is once again the highest rated camera on DxO with a score of 98, beating the iPhone 8 and Note 8 by four points. The camera features a 12 megapixel sensor and an F1.8 aperture.

One particularly impressive bit is that Google managed to create a portrait mode with just a single camera. Granted, Google’s app already had a ‘Lens Blur’ mode for ages – but it was clumsy to the point of being unusable. You had to move your phone at an angle to capture parallax for depth information and the results were mediocre at best.

The smaller pixel will cost $649 or $749 for 64 GB or 128 GB, while the larger Pixel will be $849/949. That’s an event steeper difference than last year, when the two models were about $100 apart, but that falls in line with Google positioning the XL as the more premium model with the small bezels. As a promotion, Google is also including a free Google Home Mini with a purchase of the Pixel.

Read next: Google is giving Pixel owners a preview of Lens