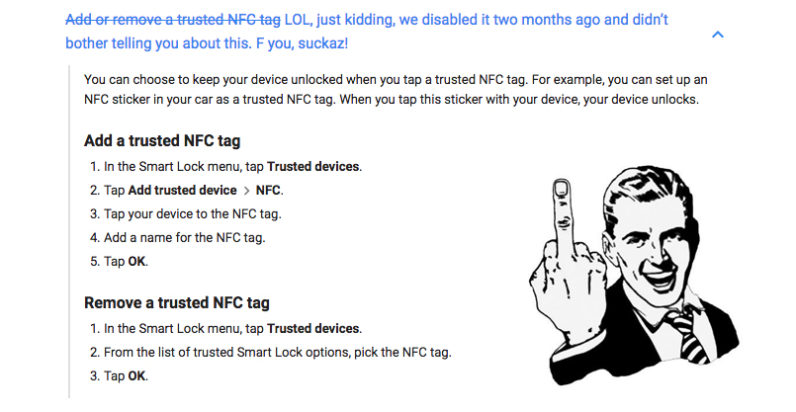 Google has silently disabled support for NFC Smart Unlock – the feature that allowed users to unlock their Android handsets with an NFC-powered physical token or a card. The disturbing part is that the internet giant never even bothered to alert users about its removal.

The decision was confirmed by a Google employee in an NFC Smart Lock bug report filed on the company’s Issue Tracker. The employee in question said that the “feature has been deprecated for new users,” clarifying that “the option will be hidden” for anybody who isn’t already an existing NFC user.

(Please note that the bug report page is only accessible to users signed in to a Google account.)

This sketchy move was brought to light by a Reddit sleuth going by the alias JamesDwho, who took to the Android community to notify users about the removal.

NFC Smart Unlock is no longer available to any users who made or set up a new Google account from July/August this year and onwards, according to the Redditor. He further points out that anybody who still has access to the feature should avoid signing out or updating their device – or else it would disappear for them too.

Another particularly outrageous thing about this development is that confused users have been seeking for ways to “fix” NFC Smart Unlock left and right for weeks now. Google never graced them with even a simple explanation.

Way to go, Google, great way to treat your customers.

Update: A Google employee has since provided the following statement with regards to removing the NFC Smart Unlock feature:

Smart Lock provides seamless and secure methods of unlocking your Android phone. For example, you can keep your device unlocked when it’s connected to your Bluetooth device such as your smartwatch or car, or when it’s in a trusted place, such as your home. Since Smart Lock was launched in Android 5.0, we have added more methods of unlocking, such as On-Body detection and made several security improvements to the different unlock methods. Today, many Android phones also support Fingerprint authentication which provides another convenient way to unlock your phone.
We constantly evaluate unlock mechanisms and evolve them. Our end goal is to provide the best possible experience for you that balances security, simplicity and convenience. We constantly make product decisions based on multiple factors including usage, the value we provide, your feedback, and the availability of alternatives.
In the case of NFC unlock, we’ve seen extremely low usage. At the same time, there are alternatives available now that are easy to use, are secure and have much wider adoption. Given this, we decided to disable NFC unlock. However, if you have NFC unlock currently set up, you can continue to use it until you reset your device, switch to a different device, or explicitly remove the NFC tag from Smart Lock settings.
We apologize to those of you who are affected by this and we’re sorry for any inconvenience. We encourage you to use a different unlock method in Smart Lock, such as Trusted Bluetooth devices, Trusted Places, or On-body detection, all of which we believe to provide a better user experience.

Read next: 4 reasons why running a small business beats owning a startup