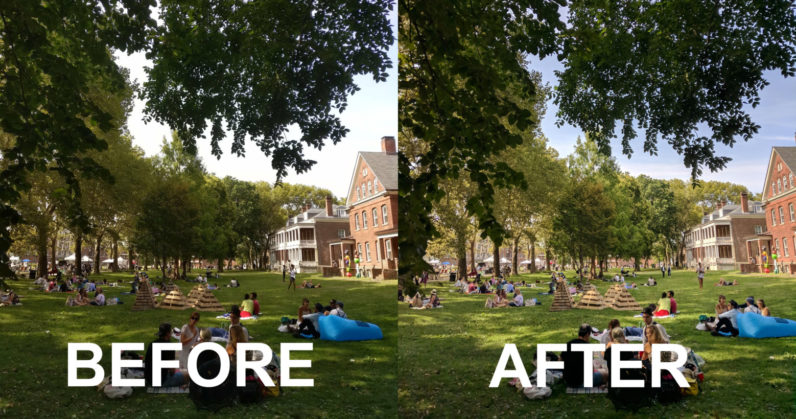 The Google Pixel is often considered to have the very best camera around thanks to some truly effective software processing. Now you can get that same processing on almost any recent Android flagship.

While you’ve been able to sideload Google’s Camera app for some time, the actual processing that gives the Pixel its beautiful photos is still exclusive. Called HDR+, the technology not only increases dynamic range, like traditional HDR modes, but reduces noise and improve colors as well.

In very oversimplified terms, the camera basically takes an extremely fast burst of shots, and then combines the best bit of each image for the final exposure. I’ve yet to try a camera that matches the Pixel’s consistency in rendering accurate dynamic range, realistic night-time scenes, and overall vibrant colors.

As first reported by XDA, an enterprising developer named B-S-G has ported the Pixel’s camera software to work on virtually any phone running a Snapdragon 820, 821, or 835. That means the vast majority of flagship devices released in the US since 2016. You can read XDA’s post on the most recent update to the port, or download the APK file directly here.

Keep in mind you’ll have to enable apps from unknown sources in order to install the APK. While XDA says its tested the file to make sure it’s safe, you’re still installing at your own risk.

On the phones I tested, the improvements ranged from minor to shocking, and, more importantly, Google’s camera was rarely worse than the stock app. And I’ve tried quite a few phones, though I spent most of the time testing with Samsung’s S8, a pre-production LG V30, and the Essential Phone. I’ve also tested HTC’s U11 a bit, which has the same sensor as the Pixel, but adds optical image stabilization and a faster aperture. The HTC U11’s better hardware puts it on par with the Pixel in most cases, but using the Google’s own Camera app makes it even better.

One of the most obvious signs a photo was taken with a bad camera are blown out skies. Google’s processing managed to avoid doing so better than any other camera app, even thought it’s not optimized for any of their sensors. While your mileage may vary – perhaps Google’s processing isn’t quite to your taste – it means skies were consistently blue, clouds had the texture they’re supposed to, night-time scenes had accurate color, and noise reduction was tastefully balanced with detail.

Here’s a gallery along with some descriptions for context. In every image, the Google Camera app is on the right:

There are a few caveats. It’s tweaked software, so you may encounter some bugs. You will have to switch back to your manufacturer’s camera for any custom features, and HDR+ only works on the main rear camera. You’re out of luck if you want to use the wide angle camera on the V30 or the telephoto on on the OnePlus 5, for instance. And it’s not always better; Google’s Camera isn’t optimized for non-Google devices, so there are occasionally strange artifacts like the extra graininess and flare on the S8.

Still, it’s a general improvement across the board, and I can only hope Google opens up its processing to other devices. If you’ve been unhappy with your cell phone camera, it’s at least worth a shot.

Read next: Instagram Stories may soon let you relive more than 24 hours