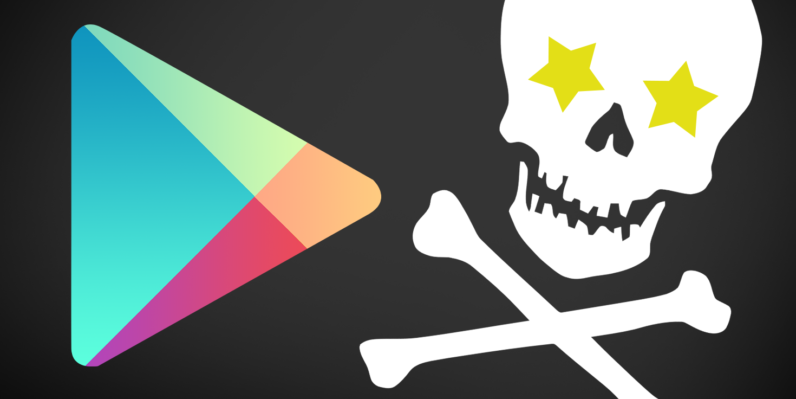 Google is facing an incessant stream of attacks from a massive network of bots, spewing thousands of fake five-star reviews on the Play Store – and it seems the botnet is growing bigger and smarter each day.

The bot barrage initially came to light following reports from two weeks ago that WhatsApp had suddenly amassed a large batch of evidently fake five-star ratings. Upon further investigation, TNW discovered many other popular apps, including Chrome, Gmail and Messenger, also got hit with spammy reviews.

One trait the fake reviews share is that all of them contain game-related references – even when the apps where they appear have nothing to do with gaming. Here’s an example from Messenger:

As readers on Reddit previously speculated, the army of bots has most likely been tasked to rate well-established apps in an attempt to give more credibility to the ratings it leaves on apps from paying customers.

Google has traditionally managed to adequately moderate the Play Store for bogus ratings, which is why fake reviews tend to be rather expensive, selling for $1 a piece on average.

The Big G has so far refused to comment on the exact magnitude and cause of the sudden deluge of game-related spam reviews, but it seems the botnet has continued to gradually expand since our last report a week ago.

According to data sourced from intelligence firm AppAnnie, it appears the inflow of suspicious positive reviews is increasing at a fast pace. More troubling, however, is that the botnet seems to be getting better at covering its tracks by diversifying the overwhelmingly positive reviews with slightly less positive ones. 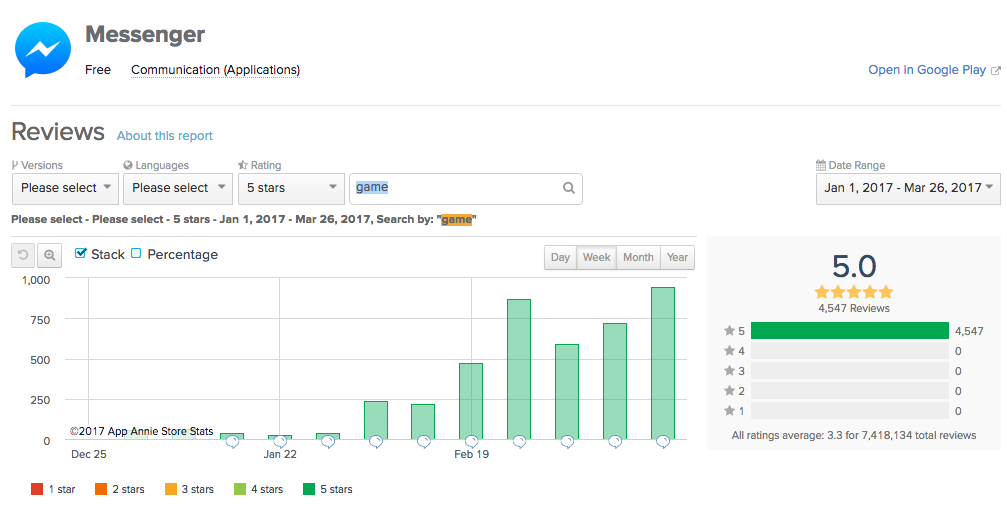 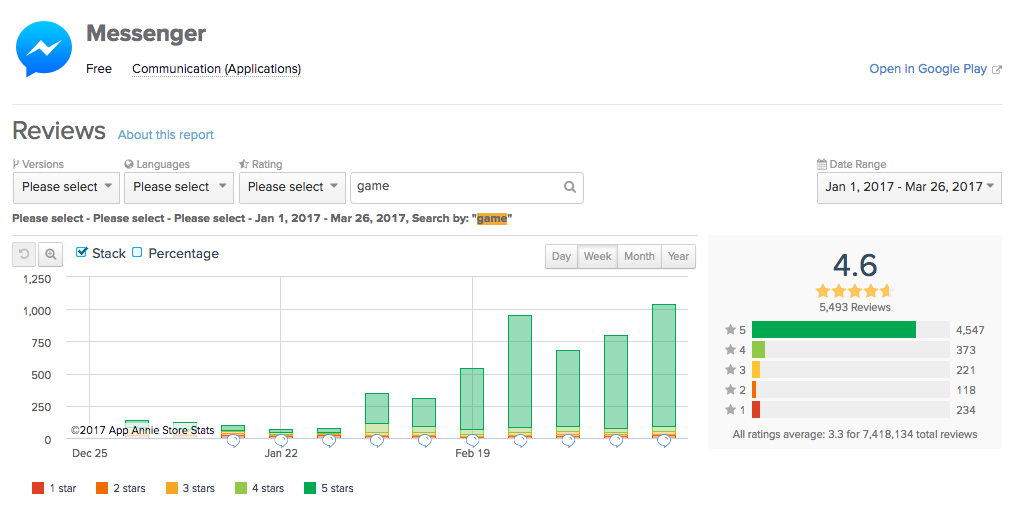 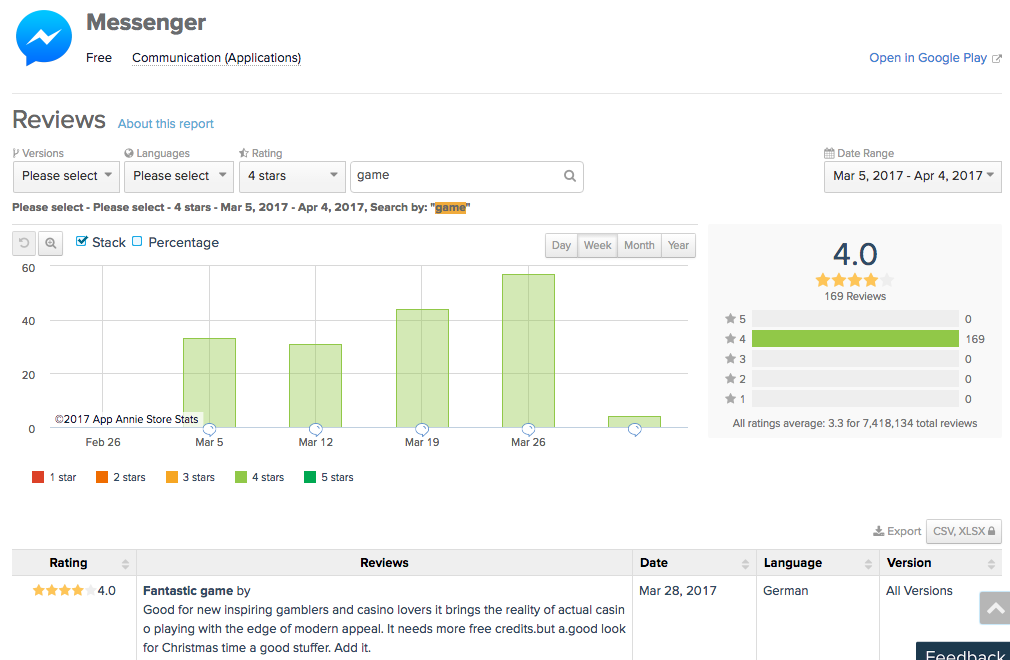 As the figures above indicate, Messenger had received a little over 4,500 game-related reviews in the period between January 1 and March 26. By contrast, it has stacked almost 3,000 new fake five-star ratings during the eight days since March 26.

Interestingly, the number of non-five-star reviews mentioning the word ‘game’ seems to be suspiciously – but consistently – low throughout both of these periods.

What is particularly worrying is that Messenger isn’t an isolated case. In fact, Gmail, Chrome, Firefox and WhatsApp have similarly registered spikes in fake reviews during the same timeframes. 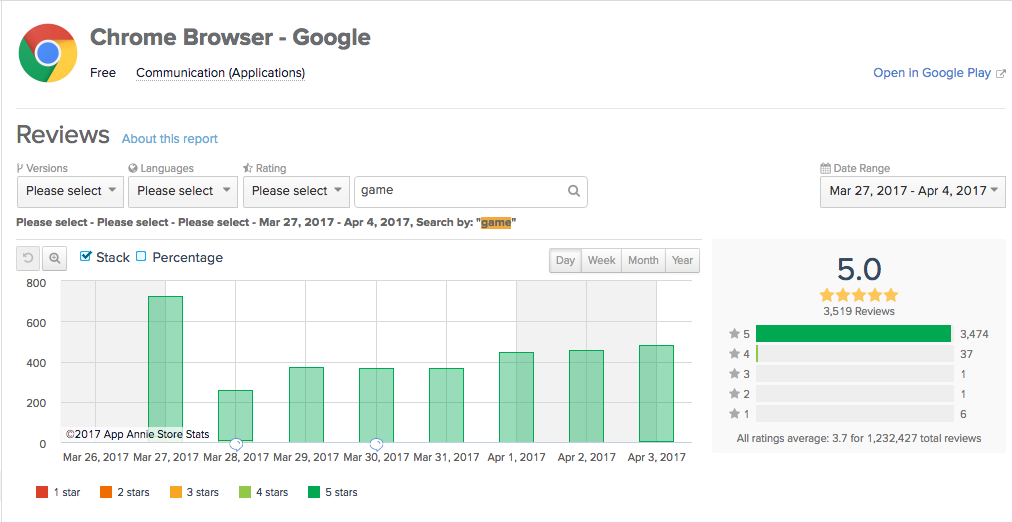 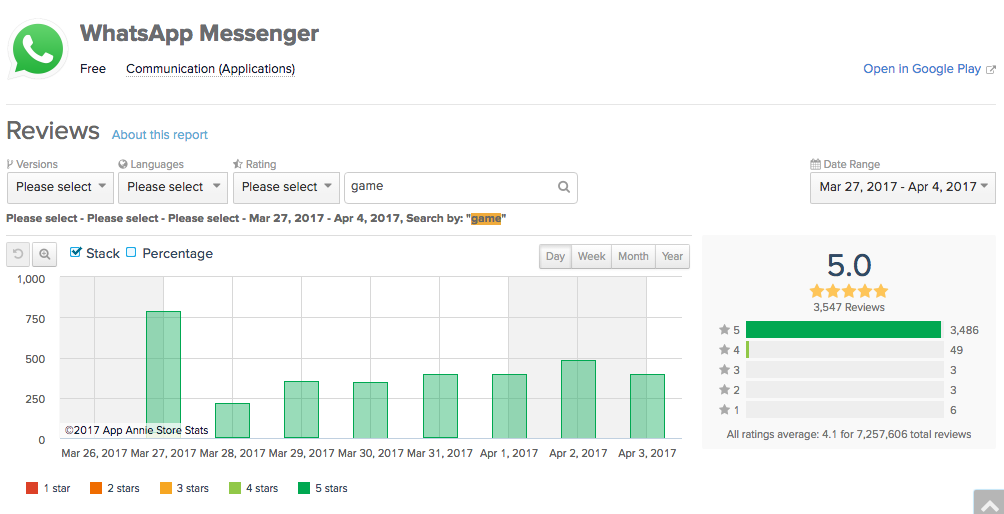 One striking coincidence is that the frequency at which all of these apps receive game-related reviews is relatively identical, even though the total number of ratings registered seems to vary from app to app.

This almost certainly means the same botnet is behind the litany of phony review bombardments.

But here’s the most intriguing part: A significant chunk of the clearly spammy reviews make obscure references to ‘Kindle’ – even though they are about Android apps distributed through the Play Store.

WhatsApp, Chrome and Kindle have all registered between 160 and 180 Kindle-related reviews – all of which happen to give five-star ratings.

Curiously, all three apps saw a sudden boost in reviews containing the keyword ‘Kindle’ on the same days  – most notably on March 26 and April 3. 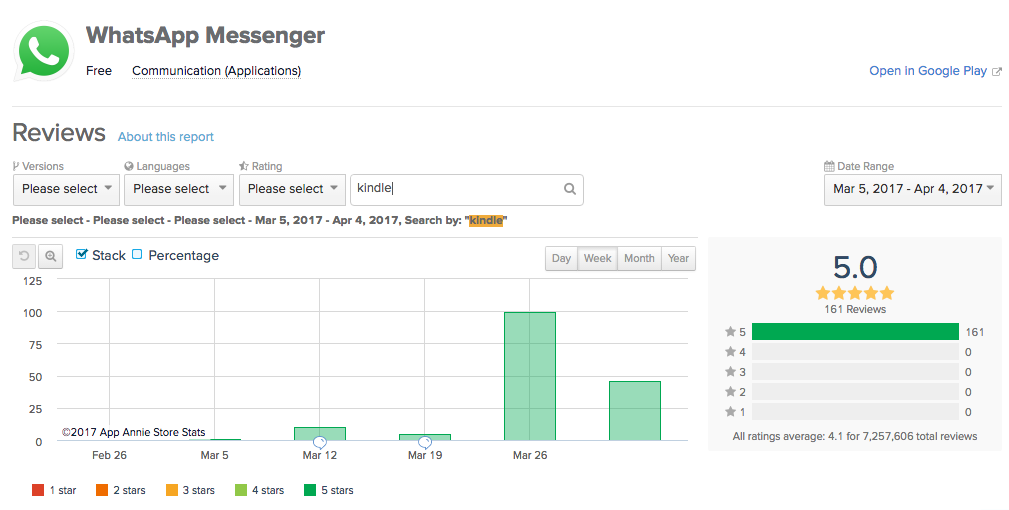 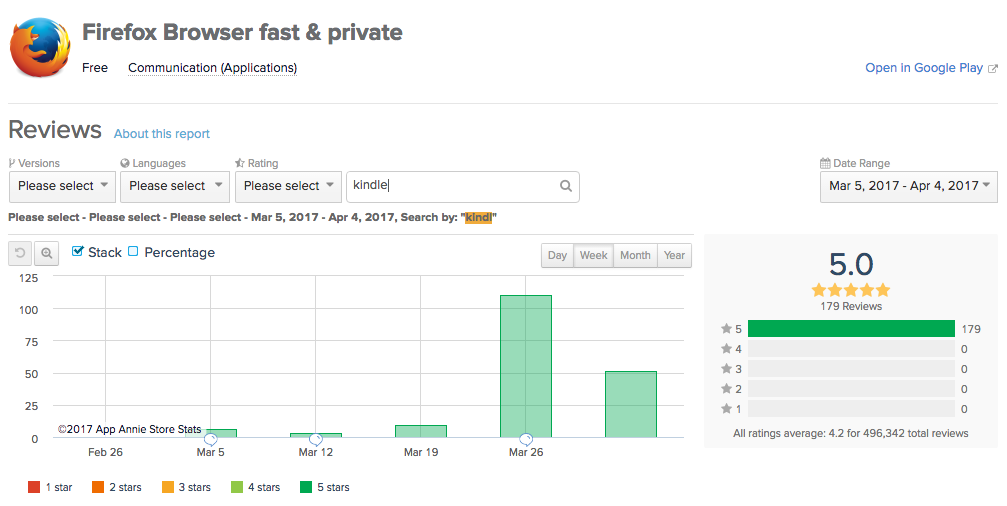 Another detail that raises eyebrows is that, in comparison to authentic reviews with named authors, most of the fake ones are somehow either linked to obscure ‘Google Users’ or not linked to any account names at all.

We’re not sure precisely what this means, but we’ve contacted AppAnnie for further clarification.

You can observe the differences here: 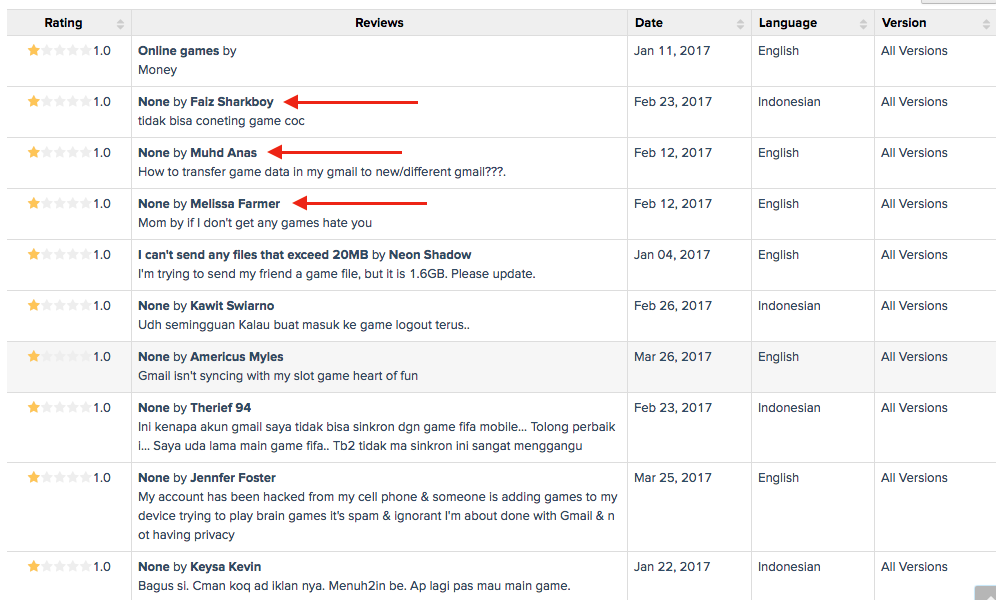 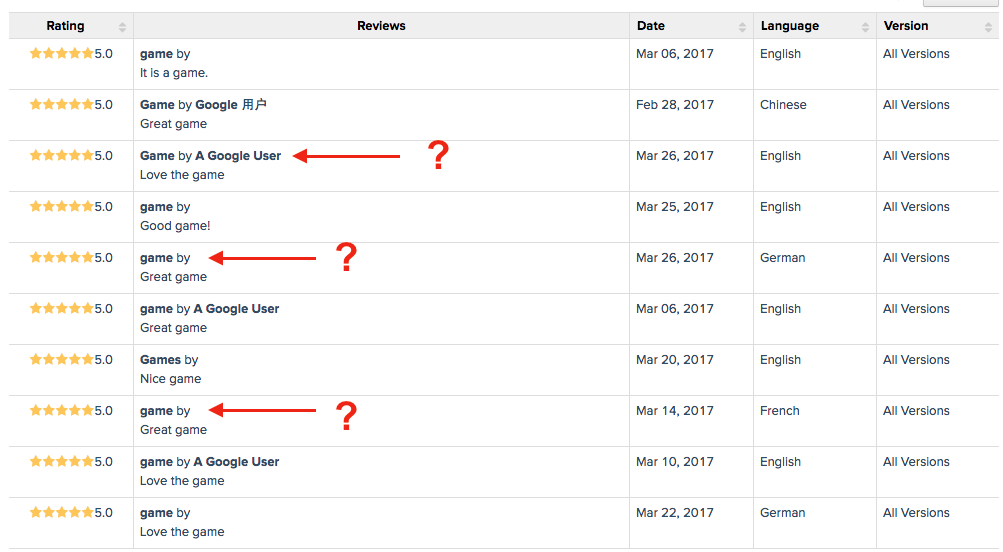 As pointed out in our previous coverage, it remains unclear how widespread the issue is, but chances are there are tons more bogus reviews that are much better disguised and thus more difficult to identify.

The issue appears to be exclusively limited to the Play Store as TNW has been unable to find similar reviews on Apple’s App Store.

Fake reviews on the Play Store are nothing new at this point. Redditors caught another phony rating outbreak last year when a user spotted a heap of spammy reviews for a game called Surfin’ Sam.

In addition to tampering with overall app rankings, the problem with fake reviews is that users often check ratings before making the decision to spend money on certain apps. This is why doctored five-star reviews could lead on customers into buying apps that are otherwise subpar.

Two weeks ago, AppAnnie confirmed to TNW that all data sourced is indeed authentic, but stopped short at making any guesses as to who or what might be causing the flood of fake reviews.

Google, in turn, has ignored multiple requests for comment from TNW – but we will make sure to update the piece in case we hear back.

Until then: Better think twice before blindly trusting the ratings when spending money on apps.

Update: Senior analyst Sameer Singh from AppAnnie has since told TNW that the missing usernames under the seemingly fake reviews merely reflect information provided by the Play Store itself:

When presenting reviews, our Store Stats tool pulls information that is publicly available on app stores. The reviews themselves are displayed in a way that makes it easy to spot and analyse trends. This means that the reviews appearing without a name or under ‘A Google User’ are simply the information the store is providing. We are unable to confirm or deny the opinions stated in the article.

Disclaimer: There has been some confusion about AppAnnie’s role in the fake reviews. Please note that as a third-party vendor, AppAnnie merely offers easy access to data provided by Play Store. As such, any statements with regards to the authenticity of the reviews mentioned above bear no relation to AppAnnie.