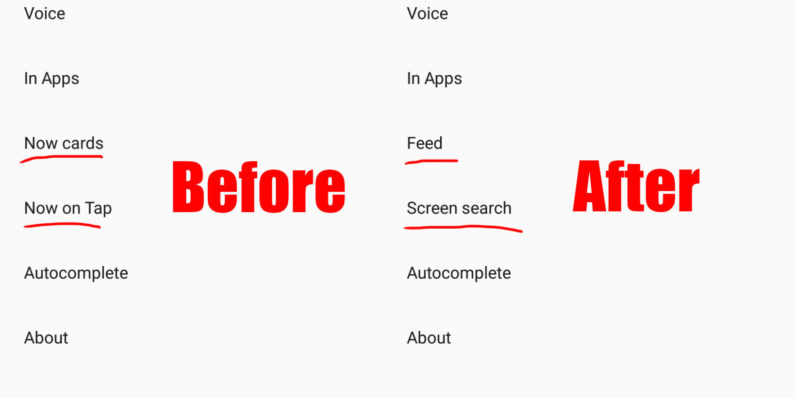 While Google’s latest update to the Google Search app beta on Android seemed fairly innocuous, Android Police noticed a major change which we’ve since replicated: the company has removed all references to Google Now.

The Google Now cards are now called “Feed,” while “Now on Tap”  is now simply called “Screen search.” Tapping the three dot menu still provides a ‘Customize Google Now’ option, but at this point my guess is that it’s going to be removed as well.

This is all likely because the Google Assistant is on its way. It was never quit clear how Assistant and Now would live side-by-side, and though it wouldn’t have been surprising to see the voice aspect of Now give way to Assistant, we didn’t expect the company to just kill the branding its used since 2012 and Android Jellybean.

Of course, this is just a beta and things may change, but killing the branding does seem like the best option. ‘Google Now’ is a bit of a confusing name, and it clearly never worked so well for the company, considering it had to make a commercial to explain Now on Tap…. eight months after its release.

We’ve contacted Google for more information and will update this post if we hear back. In any case, we’ll probably learn more about Assistant with the upcoming October 4 event, so stay tuned.

Read next: Chinese woman falls prey to possibly the most clever iPhone scam of all time