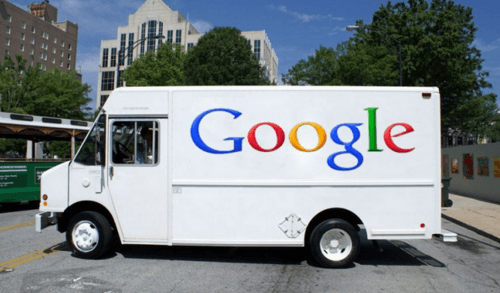 This week, the US patent office issued 5,373 patents. Each patent adds a little something new to the human knowledge base. As we cannot list all five thousand, the PatentYogi team has selected the six most interesting patents.

The patent reveals that these trucks would be fitted with a series of lockers that can be unlocked with a PIN code sent to the person waiting for the delivery before the truck arrives at their location.

Disney has patented a cool holographic style display for handheld devices. The patented display renders an anamorphic projection of 3D scene geometry on a handled device using asymmetric perspective geometry projection. Once the pose of the handheld device is determined, a relative eye position is inferred when the device is tilted away from an initial or default pose, based on data supplied by accelerometers. The invention results in a holographic style display without the need for glasses or external sensing attachments.

Feel confused while tipping? Ebay has patented an intelligent tilling technique that provides statistics (such as average tip, standard tip, etc.) regarding how much consumers usually tip at a particular service provider place based on similar demographics, similar spending patterns, similar number of visits to the merchant, etc.

The service provider can also indicate that the gratuity or portion of the gratuity will be donated to charity.

Google patents technology to generate models of the indoor spaces like homes and office buildings. The technology can provide turn-by-turn directions to indoor locations, for example, a conference room or exit.

Arx Pax patented improved propulsion and control technique for hover engines for its hyperloop transport technology. The technology can also be used in elevators. The hover engines use magnetic fields to induce eddy currents and generate lift and specific magnet configurations are used to generate thrust.

Disney is going ahead with its drone program. This week they patented robust and autonomous docking and recharging of Quadcopters.

Read next: Microsoft has patented a cure for filthy touchscreens

Read next: End procrastination and upgrade your life with the Ultimate Productivity Hacks Bundle