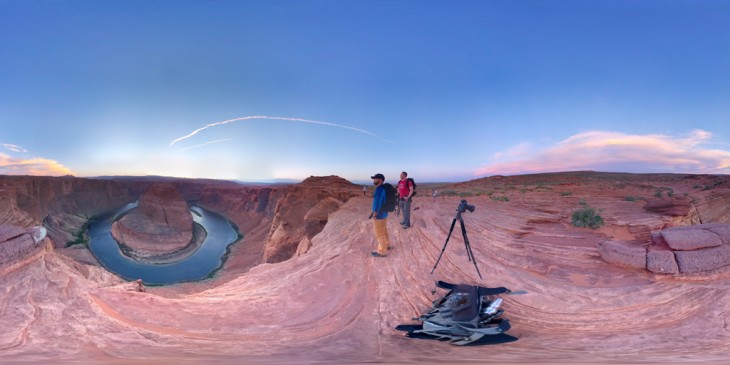 If you need a refresher, Android 4.2 (Jelly Bean) and above comes with a photo sphere camera that lets you snap photos in any direction and piece them together into 360º panoramas that Google calls “photo spheres.” You can then view these on your phone, share them to Google+, add them to Google Maps, and even post them on your own website.

Below is a screenshot of the new Google Maps for desktop with a photo sphere (notice the thumbnails at the bottom that show all the photo coverage, with each image placed on the map):

To add your own, you’ll need to sign into the Views site with your Google+ profile. Next, click the blue camera button on the top right of the page and import your existing photo spheres from your Google+ photos, or tap “Share” in Android’s Gallery app and select Google Maps.

On Views, you get your own page which shows all your photo spheres and lets you add descriptions about the place you’ve visited. You can also explore your uploads on a map.

Evan Rapoport, Product Manager of Google Maps & Photo Sphere, has shared his own Views page and corresponding map as an example:

Understandably, there isn’t that much content on Views yet, so Google has added the Street View Gallery to compensate: it features panoramas of the company’s most popular Street View collections. You can access it on any Views page by hitting the “Explore” button at the top.

It’s not clear why Google chose to launch Views now, as opposed to when photo spheres first came out. A pessimist would say the company expected a bigger response but didn’t get it, so Views is an attempt to boost the feature’s popularity, while an optimist would argue Views was planned to launch when more Android users could take advantage of it. Either way, Views is a clever way to crowdsource more content onto Google Maps.

See also – Google expands photo sphere viewing from Android and Google+ to the Web with new widget and Android 4.2 users can contribute their photo sphere images to Google Maps