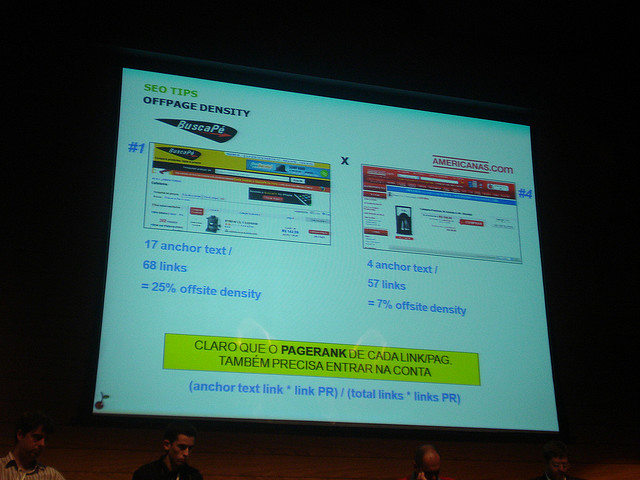 . This is not just about a big exit; as you can imagine, Buscapé is also a leader in its fast-growing segment (see our post about e-commerce in Brazil). According to comScore, it attracted 16m unique visitors in September – “almost one third of the total Internet audience in Brazil,” Buscapé adds.

This second complaint is hard to fact-check, not only because it supposes to test it on a large amount of searches, but also because Buscapé has also been buying sponsored links, as you can see in this example:

Yet, Buscapé is convinced it is being discriminated against, and decided to make this complaint a formal one yesterday by seizing the Secretariat of Economic Law (SDE) of the Brazilian Ministry of Justice, which is in charge of investigating irregularities in the economic sector.

According to Buscapé’s COO Rodrigo Borer, the complaint filed by the company contains evidence against Google. It is based on technical observations of Google’s algorithm made by Buscapé and consultancy firms it contracted, but also on declarations of Google’s executives, he says. His conviction, he details, is that Google is using a different algorithm when it comes to inserting Google Shopping search results within general search results.

While this is a first in Brazil since the recent launch of Google Shopping, Google has faced plenty of similar lawsuits across the world, particularly in the US . Earlier this week, two US Senators sent a letter to the Federal Trade Commission, asking the FTC to launch an anti-trust investigation on Google, which has sometimes been described as a “Googleopoly”.

This is something Buscapé was aware of when Google Shopping was launched in Brazil, and it encouraged the company to watch its new competitor very closely from the very beginning, Borer explains.

Still, judges in other countries have tended to decide in favor of Google so far, arguing that it isn’t a monopoly since users can still access competing services. Beyond the debate on Google’s neutrality, this could also be the case in Brazil, since consumers can theoretically opt for other search engines (though only less than 10% do) or directly use Buscapé’s iPad app.

However, things may be different in Brazil. According to O Estado, the SDE still has to decide on the course of events, which means an anti-trust investigation against Google is a possibility. The outcome of this confrontation is less clear in a country like Brazil, whose justice is notoriously unpredictable.

This is especially true on a local level – and Google Brasil was reminded of this the hard way when a local judge decided to freeze around US$141,000 from its bank accounts after the company declined to reveal the identity of three anonymous bloggers (see our previous story).

Will the SDE also decide to side with one of Brazil’s champions against the American giant and seize the Brazilian anti-trust agency CADE within the next two weeks? Only time will tell.

We have reached out to Google and will update this post if we learn more.