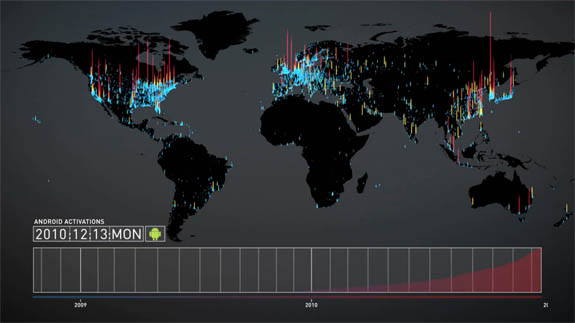 Google’s Android chief Andy Rubin tweeted this morning to announce that Google is now activating 500,000 devices each day, a 100,000 increase since it’s last announcement at Google I/O in May.

Rubin’s tweet also states that Android activations are growing at 4.4% week on week:

Google’s huge rise will have been helped by the launch of Honeycomb-powered tablets as Motorola, Samsung and HTC, with its Gingerbread tablet, try to make inroads into Apple’s iPad dominance.

The search giant previously announced that it had already activated 100 million Android devices from 36 OEMS and 215 Carriers. Hugo Barra, Google’s Product Management Director of Android said that there were 450,000 Android developers and 200,000 apps available to consumers.

At the time there were 310 Android devices in 112 countries, which has increased significantly in the month since the announcement.

Read next: Want to pay your electricity bill with your mobile phone? In Egypt, you can soon