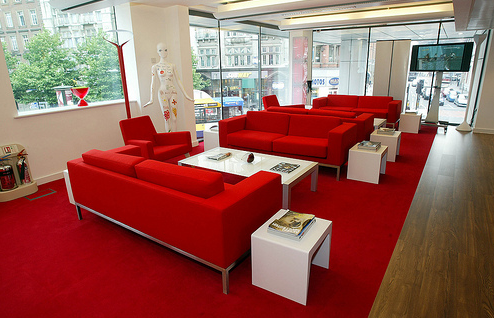 At the end of January, Google scooped up a snazzy 40,000 square ft office in London, U.K. at 123 Buckingham Palace Road. Now today, as Forbes reports, Google has snagged a 160,000 square ft in the city’s West End at the colorful Central Saint Giles development, claiming nearly half of the development’s 400,000 square feet of available office space that Sony and Facebook had reportedly been interested in as well.

A source close to the deal told Forbes’ Parmy Olson that Google is paying roughly £65 per square foot, suggesting an annual rental bill of £10.4 million ($16.8 million).

While much of its staff will stay in the old offices, Google will barely fill the new space, suggesting either aggressive hiring plans or perhaps a local acquisition in London’s slowly blossoming startup scene.

Google’s managing director in the U.K., Matt Brittin, said to Forbes that it would be designing the new digs, “in Google style,” and that “This is all part of our continued investment in our U.K. operations, and we’re hiring rapidly across all our teams.”

Read next: Angry Birds pushed back to June 29th for Windows Phone 7