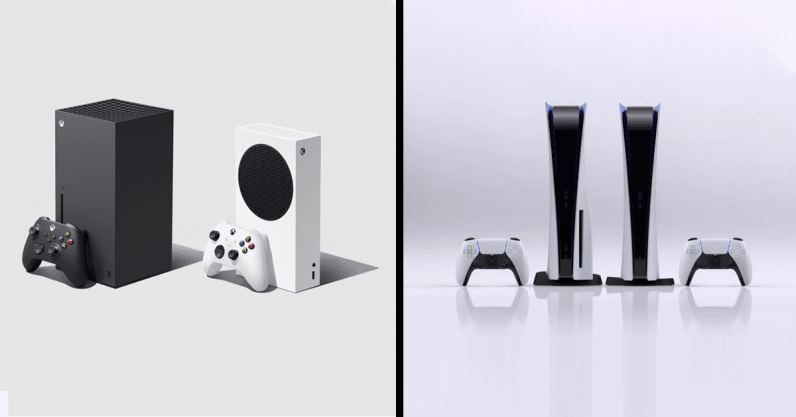 It’s been an absolute bummer of a year, but there’s light at the end of the tunnel: video games. Step forward, Microsoft and Sony.

The former’s consoles — the Xbox Series S and X — launched worldwide on November 10. While the PlayStation 5 will arrive on November 12 in the US and November 19 in the rest of the world.

And, after having spent a good chunk of time with both, I can safely say there are a lot of reasons to be excited.

It’s been seven years since the release of the PS4 and the Xbox One, both of which got souped-up versions with the PS4 Pro and Xbox One X respectively. Late generation titles like The Last of Us Part II and Red Dead Redemption 2 looked amazing, but recent graphical developments like real-time ray tracing weren’t possible on the seven-year-old consoles.

The time’s right for new hardware.

Consoles have become more intricate over these past few generations, so navigating the launches can be tricky for the average consumer that just wants to play some Call of Duty. I’ve been covering games for over a decade, and it still took me weeks of reading up and tinkering around with both consoles to figure everything out.

Now I can imagine you’re not looking to spend hours digging through forum threads and Reddit posts, so I’ve done my best to compile a list of questions you might have here.

So what’s new with these new game consoles?

We won’t know the exact power difference between the two consoles until later down the line, but judging by the early games we can say they’re both in the same ballpark.

To go along with all that new horsepower is a new type of hard drive tech: NVMe SSD, or Non-Volatile Memory Express Solid State Drive if you want to be a nerd. These are not your spinning platter discs of Ye Olde Hard Drives, but rather small chips that deliver near instant load times.

Ok but what does that mean in practice?

On the graphics end, both consoles can deliver 4K graphics at higher framerates with increased fidelity. Not only will games look sharper and run better, the improved horsepower also allows for more demanding effects like ray tracing, but more on that later.

And the faster hard drives? Well, they allow for near-instant load times.

Of course, games need to be optimized to fully take advantage of this new hardware, so don’t expect every game to load instantly just yet. But some games — like Spider-Man: Miles Morales on PS5 — already support this, and you can expect it to become the standard as developers become more experienced with the new hardware.

Something Microsoft’s doing with the new Xbox is allowing you to ‘quick resume’ up to six different games, meaning your console will remember exactly where you stopped playing, letting you pick up where you left off.

The PS5 doesn’t have quick resume, but it instead allows you to instantly jump into certain points in a game. You can now head into a multiplayer match from the system menu, foregoing all the intro videos and menus that would normally come before it.

A cool implementation of this can be found in Astro’s Playroom’s time trials mode. If one of your friends beats your fastest time on a certain level you’ll get a system notification about it, and from that you can instantly load the level in question so you can reclaim your spot on the leaderboard.

This feature needs to be implemented on a game-by-game basis, so we can only hope developers take advantage of it — but the potential is huge.

Ray tracing is a graphics technique used to accurately render the way light bounces around the world, resulting in vastly more realistic reflections and lighting.

It’s been around for ages, Pixar started using it back in 2013 when they were working on Monsters University, but it was always too demanding for video games.

Launch games like Spider-Man: Miles Morales and Watch Dogs Legion are good showcases for ray tracing, as both games take place in modern cities filled with reflective puddles and shiny windows. It’s a subtle effect that you’ll have to see in action to really appreciate, but it makes these worlds feel a lot more ‘real’.

Should I buy these new consoles now?

Unfortunately you can’t, even if you want to.

Pre-orders sold out instantly and it’s still unclear when they’ll be back in stock again. But let’s assume they’re available for the sake of argument.

If you care a lot about graphics and load times, then go get a new console. The jump in graphics is a sight to behold and you’ll be playing on these devices for years to come, so why not take the plunge sooner rather than later?

But if you don’t give a good goddamn about visuals — or don’t own a 4K TV — there are not a lot of reasons to upgrade.

Almost every big launch game (except for Demon’s Souls) is coming out on last generation’s consoles, and it’ll be a while before this changes. Big 2021 titles like Sony’s Horizon Forbidden West and Microsoft’s Halo Infinite are set to launch on the old machines too, so you should probably wait until the new consoles drop in price a bit.

Should I buy an Xbox or a PlayStation?

The high-end models of both manufacturers are nearly identical under the hood, so it all comes down to games and services.

Personally I’m more fond of Sony’s exclusives, with titles like Demon’s Souls, Horizon, and God of War planned for PS5. But Microsoft has a ton of talented game studios under its umbrella too (especially since they bought Bethesda), so that distinction is going to narrow in the future.

Services-wise, Microsoft has the edge with its Game Pass subscription. For $10 per month you get hundreds of games to download, with every single first-party game launching day one on the service. This means you won’t have to pay $60 when Halo Infinite comes out next year.

Sony has a similar service called PlayStation Now, but the library is outdated and not nearly as good as Microsoft’s.

Xbox Series S or X? PlayStation 5 normal or digital edition? Which model do I buy?

My advice? Get the one with a disc drive.

It might be tempting to save a hundred bucks up front, but downloadable games are now $69.99 in the PlayStation store and you’ll make the difference back easily if you look for deals and trade in your old games at a retailer. Both models come with a 1TB drive, which isn’t expandable at launch.

We haven’t been able to test the Series S so it’s hard to recommend, but on paper it sounds like a great little console for people who aren’t looking to upgrade to a 4K TV anytime soon. The lack of storage space might become a problem down the line and an expansion costs more than the difference between the Series S and X, so plan your purchase carefully.

What do I need to look for when buying a new TV for these new consoles?

The PlayStation 5 and the Xbox Series X are both made for 4K TVs with HDR10 and HDMI 2.1.

HDMI 2.1 allows for framerates up to 120Hz with 4K resolutions, and games already support those figures, so you’ll want to make sure your fancy new TV has the ports for it. Both consoles come with an HDMI 2.1 cable in the box, so make sure you use that when hooking up your new toys.

This doesn’t mean these new consoles won’t work on lower resolutions screens of course, they should work with nearly everything — even old CRT TVs.

The PS5 notably doesn’t support 1440P, which is a standard a lot of gaming monitors use. It will send a 1080P signal which the monitor will then upscale to 1440P, which is far from desirable. People are already begging Sony to add 1440P support and they’ve said they would consider it, so fingers crossed for an update.

Can I play my old games on these systems?

Yes! The PS5 runs almost every PS4 game, with a few minor exceptions, and the Xbox Series X can play every single Xbox One game (unless they use Kinect). The Xbox goes back further than that and supports a big selection of Xbox 360 and even original Xbox titles.

Your old games will load faster and, in a lot of cases, they’ll run better too. Both Microsoft and Sony have been updating some of their bigger titles for these consoles, so games like Gears 5 and Ghost of Tsushima are even prettier on the new hardware.

Do my old save games transfer over?

Yes! On the Xbox they all magically transfer over through the magic of the cloud.

It’s a bit more complicated with the PS5, as you bring saves over by hooking up your PS4 to the same local network and selecting the Data Transfer option in the System menu. Still, not bad, right?

Do I need to buy new controllers?

You can connect them and play whatever you like. The only big difference between the old and the new controller is the new Share button, that allows you to easily, well, share screenshots and videos through Xbox Live.

The PS5 supports PS4 controllers, but only for PS4 games. The new controller, called the DualSense, has a bunch of amazing new features like haptic triggers and improved rumble, and Sony chose to not let you play PS5 games with a controller that doesn’t have those features. Bummer.

Will these chonkers fit in my cabinet?

Idk, hope you have a big cabinet because these consoles are absolutely massive.

All three consoles can be placed vertically or horizontally.

How about the noise levels?

This might be my favorite thing about these new boxes: they’re all quiet as hell. My PS4 Pro sounded like a jet engine while playing, so this change is more than welcome.

These are all the questions I could think off, but surely this isn’t all there is to know. Feel free to hit me up on Twitter to ask me anything you want about these new consoles, I’ll be happy to answer all your Qs!

And be sure to read Rachel’s hardware reviews of the Xbox Series X and the PlayStation 5 for more details.

Read next: Spider-Man: Miles Morales has a better hero than Peter Parker