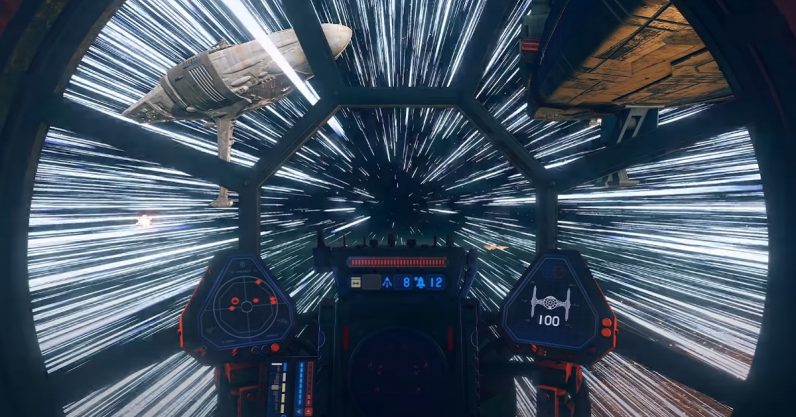 So Gamescom started tonight, and it front-loaded its opening night with plenty of game reveals. We got at least a dozen trailer and sneak peeks of new games, including an upcoming Dragon Age game and a release date on the new World of Warcraft expansion, Shadowlands. But a surprising amount of the night was dedicated to VR and to Star Wars — there were three game trailers dedicated to the latter in particular.

One of the most disappointing (and yet still fun) reveals is probably LEGO Star Wars: The Skywalker Saga. As the name implies, it’ll cover all nine of the main Star Wars films, and it’s coming out for the Switch, PS4, PS5, Xbox One, and Xbox Series X. However, it’s been delayed until Spring 2021 — it was originally expected to be released sometime this year. That said, I’ll still be happy to play it when it does come around — it’s a LEGO game, so it’s always a fun way to spend time.

In a galaxy far, far away, deep into the Outer Rim, the world of Batuu awaits your Sim. The Sims 4 Star Wars Journey to Batuu Game Pack is available September 8! Create your unique #TheSimsxStarWars story: https://t.co/OrpnA7VfUK#JourneyToBatuu pic.twitter.com/t5npF4Fmfh

That said, I’m not sure how I feel about the Sims/Star Wars crossover we’re getting with the Journey to Batuu pack. Coming out on September 8, it appears to allow your Sims to visit an in-game version of the Galaxy’s Edge area of Disney World. You’ll get to meet Star Wars characters, play with lightsabers, befriend a droid, and pick a faction to side with — kind of like a simplified The Old Republic cosplay for your Sims. I’m not sure this is exactly what Sims players were hoping for, especially since there’s currently an outcry from the community over the limited range of skin shades in the Sim creator.

We also got a gameplay trailer for Star Wars: Squadrons, including a look at the single-player gameplay. Out of all the games shown, this looks the most like a traditional Star Wars game, and even features a cameo from Princess Leia. While we get mostly cutscene footage, the trailer does blessedly show what we’re actually here to see: that sweet space dogfight footage. The trailer also teased the game’s promised VR support. Basically, it was a great show for you if you were a Star Wars fan and a VR user.

In other VR news, the trailer I was probably least expecting is a Sam & Max VR game. Yeah, you heard that right — Sam & Max, of all characters, are getting a VR adventure game. I’m not sure it’s exactly the killer app VR has been waiting for, but it looks goofy and fun, which I’ll accept. Sam & Max: This Time It’s Virtual is supposed to come out sometime next year.

Sam & Max are here to save 2020 in a brand new VR game from @HappyGiantGames.

Another VR offering is Medal of Honor: Above and Beyond, which is much more Poe-faced than Sam & Max. In fact, it’s about as serious a war game as we’re likely to get on the Oculus Rift. But given that it’s from Respawn, who have done good work lately with Jedi: Fallen Order and Titanfall 2, I’m willing to at least hear what the game has to say. Also, it involves killing Nazis, which is about as time-honored a goal as it gets in video games.

There were several other reveals, including the confirmation that yes, Dragon Age 4 is on the stove somewhere at Bioware — presumably being worked on by someone not dedicated to duct-taping a better version of Anthem together. We also got an extended gameplay trailer for Ratchet & Clank: Rift Apart, which is essentially the PS5’s tech showcase at this point.

We saw a trailer for an indie game called Twelve Minutes from Annapurna that reveals the voice cast, which apparently includes Willem Dafoe, Daisy Ridley, and James McAvoy. We’re also getting a season two of Fall Guys, which is sure to please the many, many fans of the unexpected hit.

Hopefully we’ll get a few more reveals on other nights of the show. I’m holding out hope for some console release dates and prices. If nothing else, this would be the perfect time for Microsoft to reveal the discless Xbox Series S we’ve been hearing about for a bit. Fingers crossed!