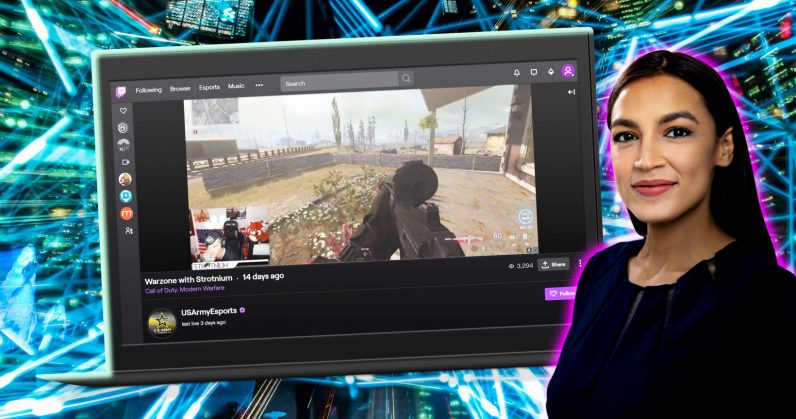 US military forces have recently joined Twitch tto share live gaming streams of their esports teams and to interact with viewers who may be interested in joining the Army, Navy or Air Force. As it turns out, they haven’t exactly been playing by the platform’s rules, and now they’ve drawn the ire of Alexandria Ocasio-Cortez.

The NY Representative is set to file an amendment to the House Appropriations bill which will prevent these military forces from using funds guaranteed by the bill to “maintain a presence on Twitch.com or any video game, esports, or live-streaming platform.”

What’s the big deal? US military forces are said to have joined Twitch with a view to gather recruits from among the streaming platform’s young audience, though the Navy says it’s on there merely to “show that we play video games, literally.”

What’s more, the Army reportedly ran ‘giveaways’ on its channel and shared automated links in its stream chat, dangling an Xbox Elite Series 2 controller as a prize. According to The Nation, those links directed users to “a recruiting form with no additional mention of a contest, odds, total number of winners, or when a drawing will occur.”

As Ocasio-Cortez articulated the concern in a statement to Motherboard, “It’s incredibly irresponsible for the Army and the Navy to be recruiting impressionable young people and children via live streaming platforms. War is not a game, and the Marine Corps’ decision not to engage in this recruiting tool should be a clear signal to the other branches of the military to cease this practice entirely.”

The news comes just after the Army announced it was pausing streaming on Twitch, after it was called out by First Amendment advocacy groups for banning activist Jordan Uhl from a Call of Duty stream on the force’s channel in which he asked, “what’s your favorite u.s. w4r cr1me [sic]?”

just having a good time with the US Army esports twitch stream @JordanUhl pic.twitter.com/qnjyxg1KP0

As Motherboard’s Matthew Gault noted, it’s far too early to say whether AOC’s proposed amendment will be taken up. At the very least, though, this will highlight military forces’ misuse of a platform that reaches impressionable young audiences.

Read next: OpenAI's new GPT-3 language explained in under 3 minutes