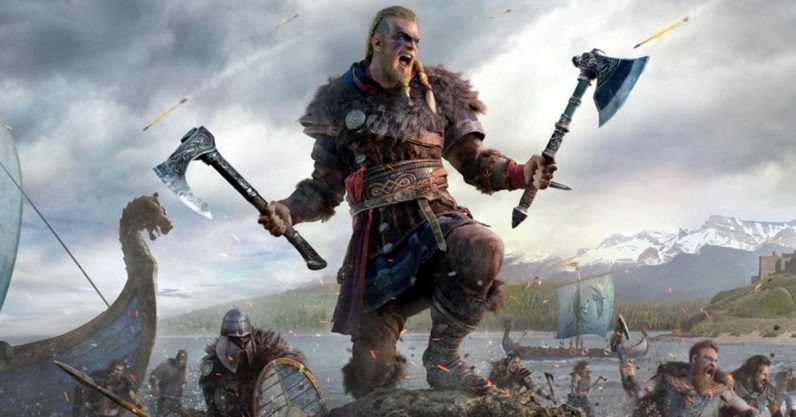 Ubisoft today finally unveiled the trailer for Assassin’s Creed Valhalla, the Viking adventure it teased yesterday with a chill art stream. It’s an excellent trailer, playing on conventionally accepted modern myths about Vikings while setting up the historical conflict. That said, I will give my eyeteeth if the game can be a little less like its predecessor, Assassin’s Creed Odyssey.

The game is set in the ninth century and stars a Viking hero who’s out to go raiding, pillaging, and settling in England. While fighting battles against the forces of King Alfred the Great (or so the trailer implies), they’re also on a quest to find a new home for their people. So far it’s not clear where the Assassins fit into it, but the bearded hero wields a hidden blade in the trailer, so presumably he is one.

The protagonist, Eivör, can apparently be either male or female, which tells me we’ve completely abandoned the attempt to make the two genders separate characters (see: Syndicate, Odyssey) and we’re going full Fire Emblem with this. I’m cool with this as I would love to play as a Viking shieldmaiden, even if it wrecks what little pretensions the series’ had to the stories being “based on genetic memory.” I’d have loved it if Ubisoft had actually used female Eivör in its trailer instead of Discount Ragnar Lothbrok, but I’ll take what I can get.

What little we’ve seen and heard so far sounds alright, but I’m just hoping and praying to Odin that Ubisoft doesn’t make just a carbon copy of Assassin’s Creed Odyssey. Because while I did enjoy that game, it felt so unlike a traditional Assassin’s Creed game that I find myself longing for a small return to first games in the series.

Ubisoft is making a big deal out of the fact that Eivör’s goal is to augment and preserve their settlement, and it’s a major function of the game‘s mechanics. Lead producer Julian Laferrière told Eurogamer the town will be the center of some major story beats, will involve some internal politics, and be the staging ground of the in-game romances. Hopefully we won’t have a repeat of the Monteriggioni mishegas in Assassin’s Creed 2, a.k.a. “the part of that otherwise excellent game no one cared about or even remembers.”

If you’ve read my AC Odyssey review, you know I wasn’t too fond of the fact that it was substantially less classic Assassin’s Creed and much more Witcher 3. I don’t mind a series evolving, but if I wanted to play Witcher 3, I already own in on PS4. Add to the fact that the game‘s sandbox was soul-crushingly huge and the emphasis on combat got very boring after a while. And that’s a shame because the story was a delight.

Hey, are we going to talk about the fact that #AssassinsCreedValhalla is going to let us engage in flyting — a.k.a. Viking rap battles??

I love a return to the more stealthy gameplay of Ezio or Altair — something that requires a little more finesse and a little less mindless brutality. Heck the trailers make a point of saying the Vikings aren’t the bloodthirsty berserkers they’re often portrayed as, not to mention a somewhat dubious leak mentioned the possibility of deeper stealth gameplay. It would at least take the series back to its roots.

That said, if I could have just one wish for this game, it’d be this: please make the sailing more Black Flag than Odyssey. When you sailed in Black Flag, it felt like you were actually operating a vehicle — it required some interaction and clever handling of the winds. In Odyssey, it’s literally just “point prow of ship at quest marker and the W key.” Boooooring. The Vikings were a sea-savvy people, so surely if any game has more complex sailing mechanics, it should be this one.

We’ll see for ourselves when the game comes out, which is supposed to be “Holiday 2020.”