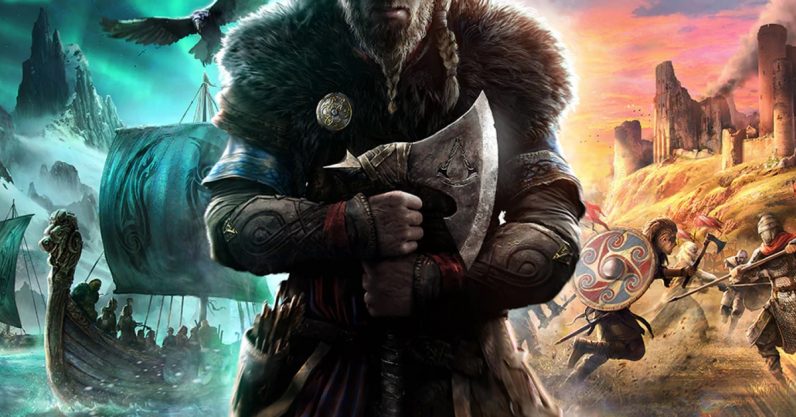 Ubisoft is taking advantage of a captive audience to give a tantalizing glimpse of the next game in the Assassin’s Creed series. In a reveal that dovetails with leaked details from months ago, we now know that the next adventure in gaming’s own historical Magic School Bus series will be set in the Viking era, and it’ll be called Assassin’s Creed Valhalla.

The company teased the reveal with an art stream. The person streaming is artist BossLogic, who’s best known for his kickass fanart — he revealed on Twitter he’d been working with Ubisoft on the new game. The entire stream consisted of a timelapse of the game‘s promotional poster being created, with the gaps slowing being filled in. I’m guessing the point of this exercise was to give the amateur historians in the crowd the chance to flex by identifying the landmarks and armor on the characters in the background. That’s about the most Assassin’s Creed thing Ubisoft could have done under the circumstances. Most people would have pegged the setting as Norse based on the longships alone, but the livestream kind of gave the game away (literally) by asking Viking-related trivia questions to the audience about five hours into the stream.

It’s not the first time we’ve heard that the new AC game would be Norse in nature. Leaked content from months ago supposedly revealed that the next game in the series would be Viking-related, and would be titled Ragnarok. The leak at the time looked somewhat dubious, so I adopted a wait-and-see attitude and now that’s what I’m actually getting. I’m definitely not disappointed — it’s a fascinating period of history that’s somewhat well-explored, but probably not in great detail. I’d be interested to see if the company nails the historical details, as conventional wisdom about the Vikings in the US is rather (for lack of a better word) Hollywood-ified.

Super excited to reveal what I have been working on for the past few months with @Ubisoft! Make sure to tune into @assassinscreed for a very first look and catch the entire process live at (https://t.co/pUuNj9GgpJ) pic.twitter.com/W5hU5TiSbh

From what we know of the historical Vikings, we can surmise the game will incorporate the sailing mechanics from previous entries (because once Ubisoft does something right, it’ll do that same thing over and over again until we stop paying for it). The leaked information also implied a big return to stealth gameplay, though given the series has morphed into a Witcher-style action RPG, I’m not sure how much weight to give that particular detail.

BossLogic’s stream was actually quite relaxing, in that it was essentially watching someone tinker with Photoshop while soothing songs from the various games‘ soundtracks played over it. It’s very chill — provided you keep the chat closed, that is. The chat on a livestream this populated are almost invariably crude and somewhat toxic, and I’m not a fan of how much the chat was pleading for there not to be another female protagonist. One of the last things added to the image was the main character’s intricately braided beard, and the chat was making noises about the gender of the character right up until then. To each their own, I know, but it still harshed the relaxing vibe of the stream.

Update, the next morning: Well, here she is:

Read next: Lenovo made a new ThinkPad keyboard for your desktop - mouse nub and all