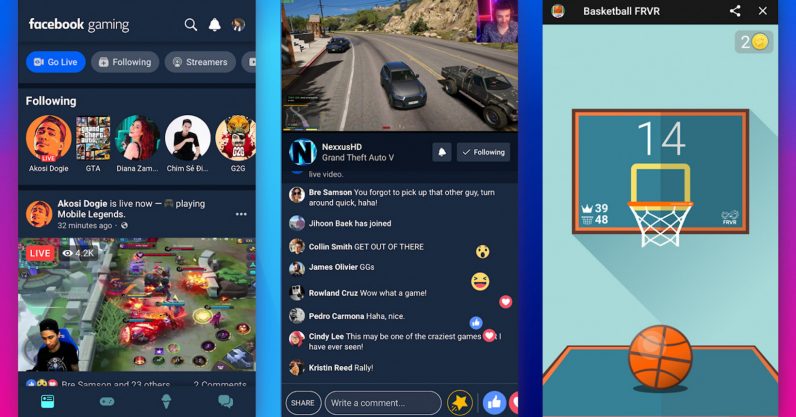 Facebook can’t seem to help trying to infiltrate every possible iteration of social media, and since its acquisition of Oculus, the company has been keen on capturing a corner of the gaming market too. Today the company is making one of its largest pushes into gaming, debuting the Facebook Gaming app in the United States to take on the likes of Twitch, YouTube, and Mixer.

The New York Times first reported on the news Sunday. The company has been testing a Facebook Gaming app in Southeast Asia and Latin America over the past 18 months, but this is the first time the feature is arriving in the US. The US launch is also presumably a stepping stone for a wider global rollout.

“We don’t want to be the background window in a Chrome Tab while someone is doing their homework or doing something else. With mobile, if you have the app open and you’re using the app, it’s in the foreground. You can’t do anything else on your mobile phone, and that is extremely powerful.”

He has a point; the singular focus of mobile devices is the reason I often begin to write articles on my phone, despite the relative inefficiency of the typing experience. Though our phones are often seen as a tool of distraction, when it comes to tasks like gaming, they can be more engaging than our PCs, where multi-tasking is often the norm.

Facebook‘s primary advantage over existing competitors is that it allows you to share streams directly on the social media platform – a place many gamers already spend a fair bit of time on otherwise. To further lower the barrier for entry, the company includes a built-in function called ‘Go Live’ that makes it easy for gamers to stream without having to install third-party software or connect their phones to a PC.

Facebook originally planned on launching the app in June, but fast-tracked it due to the coronavirus-induced lockdowns. The company likely found it important to take advantage of the massive increase in hours spent gaming now that most people are stuck at home.

Facebook Gaming is available on the Google Play Store now. At the time of writing, it is awaiting approval from Apple to launch on the App Store, but it shouldn’t be long before iOS users can join in too.

Read next: New Yorkers can now get married over Zoom and... yeah, sure, why not?