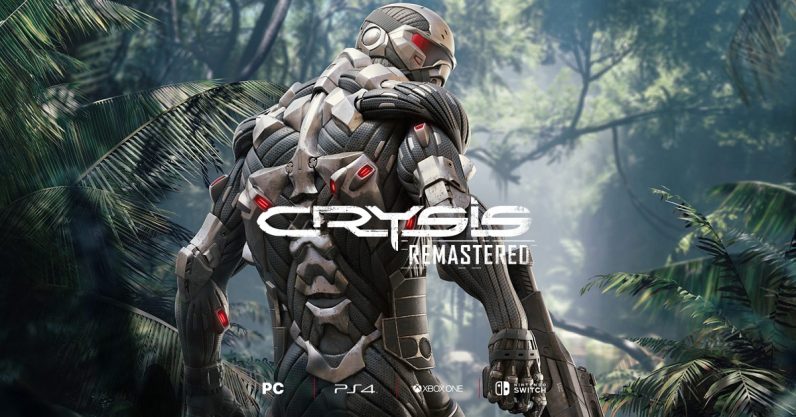 Crytek today officially revealed it’s releasing a remastering of its famous game, Crysis. It’s coming out not only for all current-generation consoles, but also for PC. I’m hoping that means we see all the wee little gamers out there asking themselves the question us oldsters have been asking ourselves for years: “But can it run Crysis?”

You’ve been asking. You’ve been waiting.
Today, that wait is over. It’s coming:

Crysis Remastered on PC, PlayStation 4, Xbox One, and – for the very first time on the Nintendo Switch Platform.https://t.co/2JnfyC7jRE pic.twitter.com/NWAHdoBEgD

The official Crysis Twitter, which has been dormant for years, made a comeback to reveal the game just as screenshots of the featured image, which was reportedly put up early and then swiftly taken down from developer Crytek’s website, began making the rounds. According to Crytek’s press release, the remastered game will have “remastered graphics and optimizations for a new generation of hardware.”

In case you’ve been living under a rock, Crysis was a 2007 first-person shooter, at the time a PC exclusive, that was infamous for its steep hardware requirements. To give you some idea of how much of a hog the game was, Digital Foundry reported in 2018: “combine the latest and greatest Intel Core i7 8700K overclocked to 5.0GHz with an Nvidia Titan Xp and there’ll still be areas of the game that drop beneath 60fps – even at 1080p.” Whether that’s because the game is still a big ol’ hog, or because it’s not optimized to run on modern hardware, I leave for my more technically-minded colleagues to say.

Over time, it became almost de rigueur for anyone to say, upon seeing a powerful PC or PC component, to say, “But can it run Crysis?” As PC Gamer noted on Crysis‘s 10th anniversary, this exact phrase has fallen out of fashion, with younger gamers not really understanding the meaning behind it. With the remastering of the game for the latest hardware, I’m expecting (read: hoping) to see a resurgence in the meme, because it’s one of gaming’s best.

I’m old enough to remember the whole “But can it run Crysis?” meme before it even could have been called a meme — though granted, I was a console gamer at the time, so it was more on the periphery of my understanding than the forefront. The funny thing was I don’t think I could have found one single person who could tell me what Crysis was about. They could all tell me how it looked, but I’ll be damned if, 13 years later, I can tell you a single thing about this game‘s story. It’s almost like a parody of the so-called PC Master Race’s preoccupation with a game‘s visual je ne sais quoi over how it plays — a preoccupation that’s died down somewhat over the years, but still exists.

Still, if they’re beefing up Crysis with the latest graphical upgrades, I’m not sure if even my newly-built PC will be able to handle it. We’ll have to find out.

Crysis Remastered is due to come out on PC, PS4, Xbox One, and Nintendo Switch “soon.”

Read next: Google Meet video calls can now show up to 16 people in one grid