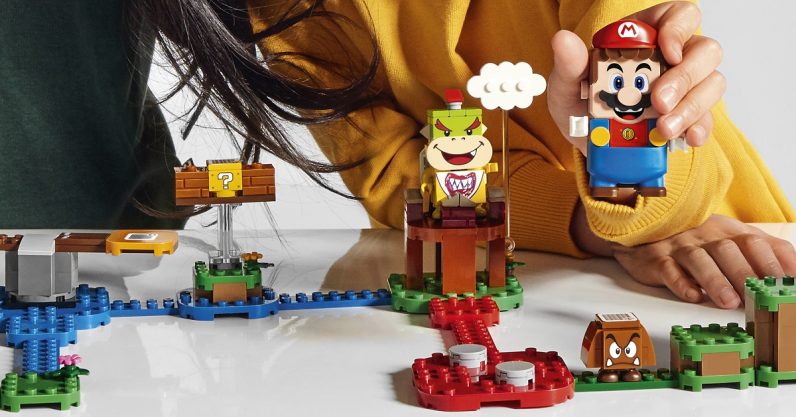 It’s always nice to see two childhood favorites combined, and the just-revealed partnership between the LEGO group and Nintendo to produce Mario in LEGO form is a doozy.

According to LEGO, this won’t be your traditional set. Instead it says it intends to try and replicate the feel of video game platforming in the physical world: “The new line will let kids experience the playful world of Super Mario like never before. Super Mario will be brought to life in the physical LEGO world and new levels of challenge and styles of play will be part of the iconic LEGO experience enjoyed by generations.“

In other words, you’ll be able to build Mario levels in the real world. The Mario figure interacts with the sets via a tiny built-in screen and speakers, and his expression even changes depending on whether he’s collecting a coin or landing on a lava tile (it was actually a little unnerving the first time I saw it). The set was originally teased earlier this week, on March 10, a.k.a MAR10 day, alongside more bizarre collaborations such as Levi’s Mario collection.

Takashi Tezuka, executive and game producer at Nintendo, corroborates this idea, saying in a statement: “The new product we created together with the LEGO Group seeks to combine two different styles of play – one where you freely build the world of Mario and the other where you play with Mario in the very world that you have created.”

This set looks great if you’ve ever wanted to play Super Mario Maker in real life, at least on a small scale. I do wonder how many sets are going to end up in the hands of children and how many in the hands of older gamers like myself whose childhoods are tied to Mario and LEGO. Either way, it looks about as delightful as you’d think such a pairing would be.

Read next: US looks to block Huawei from banks after Trump ban fails