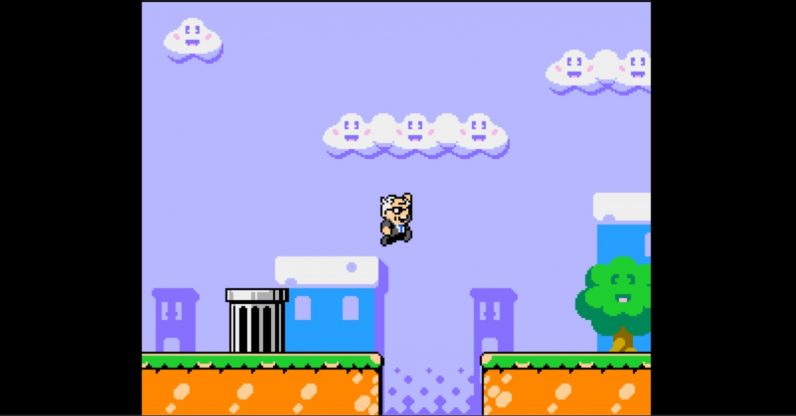 I’ve seen some weird stuff in my day, but I have to admit — I was not expecting the 2020 US Presidential election to deliver me a platformer game. But someone has apparently made just such a thing, and, bizarre controls aside, it’s actually kind of fun.

The game in question is called “Super Bernie World,” and, as the name suggests, it plumps for Bernie Sanders pretty heavily. A splash screen at the beginning of the game say the purpose is to encourage everyone to get out and vote for their candidate of choice, though I admit that a video game — something that kind of requires you to be immobile and in your home — might not be the best incentive to get me out of the house.

[Read: A Super Mario battle royale should not be this addictive]

In the game, a Bernie sprite is tasked with jumping his way across various states, stomping on tiny Goombah-ish creatures wearing very MAGA-ish red hats, and battling thinly-veiled facsimiles of American political figures. As far as gameplay goes, it’s not bad, though the keyboard controls are very bizarre. No WASD here — you jump with X, move with the arrow keys, and fire projectiles with Z. It’s hard as heck to get used to if you’re used to PC gaming’s typical button layout.

But other than that, and assuming the political affiliations are to your taste, it’s actually kind of fun. Of course it is — it’s Super Mario World in all but name, and wearing Bernie Sanders’ colors. It even has the cheery chiptunes to tickle your nostalgia. It was developed by creators from the indie studio Kitsune Games.

To be honest, it’s not Sanders’ political opponents I would worry about were I the developer of this game — it’s Nintendo. The Big N isn’t known for being flexible with anything that looks like its intellectual property, and this is flirting with the edge. I mean, “Super Bernie World?” I’d kill to be a fly on the wall of Nintendo’s legal department right about now.

Super Bernie World is currently available on Steam and Itch.io. You also play an in-browser version on Itch.io. All versions are free, though you can “Pitch In For Bernie” (i.e. contribute) via links on the game‘s main menu if you so desire.

Read next: Google asks North American employees to work from home — other companies should too